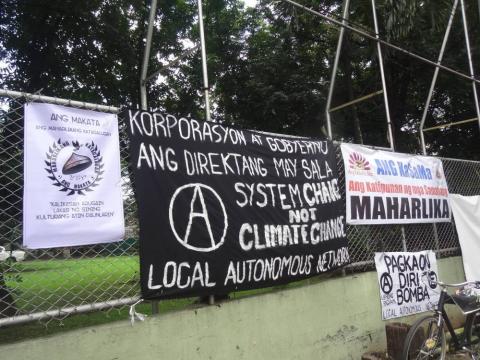 The Local Autonomous Network (LAN) is a loose network of individuals and collectives composed of anarchist, anti-authoritarian, and autonomous activists here in the Archipelago of so-called Philippines. Since the early 2000s, the people behind the network have been consistently in contact with another regardless if they are from the southern or northern part of the Archipelago. The network has no formal membership and is presented as an informal organization. The network has its own level of understanding and trust with each other, which comes from the process of the relentless organizing, campaigning and initiating different activities and projects.

We have heard about a report published online from groups abroad about an anti-anarchist crackdown in the Philippines. The report is entitled “The Philippines—The continuing crackdown on anarchists” and was first published by the UK-based Anarchist Communist Group (ACG) and was later copied and distributed onto other international anarchist sites. Most of the people involved in Local Autonomous Network had the same reaction to this report: “this is alarming.” As this is a local matter, we decided to investigate the report and do our own research locally on what was the real situation of the anarchists on the ground.

To give context, it is true that the Duterte regime is an oppressive and repressive government, even more so than with previous presidents in previous regimes. The War on Drugs that Duterte started in 2016 and has been conducted since has killed an estimated 30,000 people; this is a fact. Some of the victims of the Extra-Judicial Killings (EJK) in the War on Drugs have been drug personalities, but hundreds of EJK victims were not even connected to any kind of drug-related issue. Continuous killings and assassinations were also conducted against leftists, dissidents, peasant leaders, community organizers, and other activists. Anarchists in the Philippines were not spared and in 2018 saw Food Not Bombs volunteers murdered and arrested. (See the report: “Four Food Not Bombs Volunteers were Killed in Philippine Drug War and One Volunteer is in Jail”.)

This issue is closed and our comrades who have been detained in this issue have already been freed. The Local Autonomous Network has been actively part of the campaign against the War on Drugs and the atrocities made by the State since September 2016. The LAN does events, protest actions, zine publications, and other initiatives against these mass killings.

In the era of the COVID-19 pandemic, the authoritarian Duterte regime treats the current crisis like it is in a war and deploys police and military in checkpoints instead of strengthening the health and medical needs of the people. It is true that in this lockdown, people have been suffering, especially the urban poor and the marginalized sectors. The government is not really prepared on how to handle the health crisis. Instead of helping and supporting the people who have lost their jobs, the government instead puts more of their effort into controlling the movements of people without clear plans on how the people will live. For example, the government’s financial assistance has been delayed and some people are going out into the streets begging for food.

Now, based on our inquiries about the report of the anarchist crackdown and killings in the Philippines, we have not been able to confirm the details behind “The Philippines—The continuing crackdown on anarchists.” The details on the report seems unreliable. We have come to the conclusion that the report is fake news and has no truth in it. This is according to people who know the writers behind the report. The people who wrote the report have no connection at all with Local Autonomous Network nor have they had any involvement in anarchist projects or initiatives. We have tried to reach out to them and to make conversation with them to clarify things and with the intention to make solidarity actions with them, but they instead became defensive. We have also found that before this report was made, there have been multiple letters of appeal coming from the writers of the report asking people abroad for financial support. With the clear inaccuracy of the report coupled with solicitation for financial support, we then question the motives of the people behind the report.

As anarchists in the Archipelago, we are currently not the target of the State. As far as we are aware, the State is largely unaware of our organizing. We are very careful and tactical on promoting anarchism publicly. We do not want anarchism to be compromised on this unveracious report that this unaffiliated group sent. The anarchist network here is very small and we know each other very well; with our current internet technology we would know if there was an incident against our comrades on the ground. With that said, we did not hear anything about what allegedly happened in Cebu and we first learned of the issue from anarchist websites abroad who posted and republished this false report.

We know that the State here is targeting dissidents, but not because they are anarchist.

Local Autonomous Network then demands news outlets to put down and delete the false report immediately in all the websites, blogs, twitter or Facebook pages. This is for the security and safety of anarchists in the Archipelago. This report compromises the anarchist network in the archipelago with an alarming headline and the mendacities of the fake news written.

We hope for the cooperation of our international comrades on this issue.

For anarchist news and updates see the various collectives who are part of the Local Autonomous Network:

Tags:
interanarchist conflict
disputed stories
Philippines
too far away to know what’s up

How To Talk to the Media, If You Must

Rioting in France in Solidarity with Anti-Police Uprising in US

Looting, Fires and Gunfire Against Police in United States