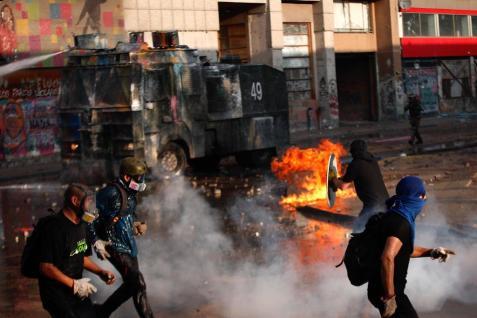 We do not represent anyone or speak for all of the module. We believe that these clarifications are necessary because of the harmful “romanticization” that the street and the struggle have given to this module of “protesters.” Fighting spirits not only dissolved on the street, it had a real effect on the ability to coordinate between us and the outside.

Despite that and our own incapacities, some of us unite in an anti-authoritarian affinity. With this in mind and despite the fact that this is an embryonic situation of political imprisonment, we believe it is important to get some voices out on the street and clarify some things.

Those of us who collaborate to write these letters do so with our conviction of fighting intact and ready; we think that the battle inside and outside the prisons is a necessity for the present, despite the adverse health situation that is used by power as an excuse to militarize even more our lives, submitting ourselves with new and old tools to the perverse control of the State and the multinationals, which are only committed to defending the system that generates profits.

In this context, a group of brave prisoners began a peaceful strike movement inside the prisons; our solidarity and strength are with them; even though we were unable to join the mobilization as a module, we will use other tools to show solidarity with this scenario, since it touches the dignity and the heart of every spirit deprived of freedom. And we cannot bear the stamp of indifference or omission.

The fight is here and everywhere, despite the contradiction of asking for solutions from the same institutions that keep us captive; the urgency of improving living conditions and the need to decongest prisons do not leave us without opinion.

While we cannot demolish at the root the sadistic prison institution (public or concessionary, for adults or minors), we believe that our fight as prisoners must be for this and for the freedom of prisoners against property and those arrested in the Revolt. This is a call for the struggle to continue, despite the adversities, not only for our liberation, but for the absolute destruction of all the social relations and institutions that keep us enslaved and that show their real fascist face in the face of this pandemic. We repudiate the false commitment of that left accomplice to the power that perfected the predatory and repressive system that today brings out its claws; the Trojan horses of capital must also burn on the barricade.

We appeal to real and active solidarity between the exploited and various horizontal and anti-authoritarian initiatives as the only way to fight against prison, while we are gradually taking some minimal things from power by our hands, our goal is the total dismantling of the prisons and any society that needs them.

Let’s open all the cages!

Strength to prisoners on strike and their families!

Our organization will be your downfall!

Until the fall of the last bastion of prison society!

Against capital, its defenders and its false critics!

Only the struggle will set us free!

Fire to prisons and mansions!

Some anarchists imprisoned in module 14 of santiasco 1.