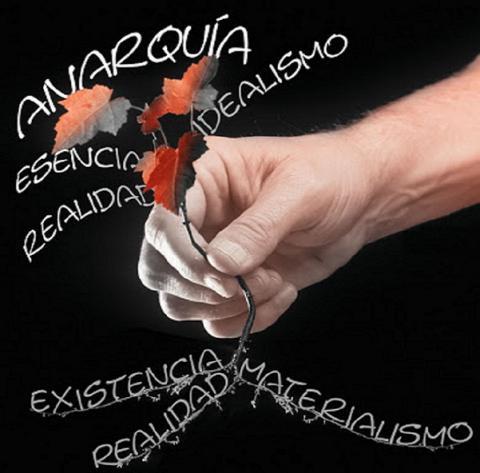 If anarchism values diversity, it can’t surprise us that it be plural, diverse, polymorph, and it is to such a degree that it becomes more appropriate to speak of “anarchisms” than anarchism. From anarcho-communism, to individualism, from insurrectionalism, up to anarcho-feminism, passing by neo-anarchism, by post-anarchism among others… such are the leafy branches of the diversity of anarchism.

That diversity is contemplated sometimes as a sore and as a deficiency, and some sectors intend to unify anarchism. But, I’ve already told you that I’m a militant against uniformity, so that, on my part, I wish that the attempts of unification never, never, manage to triumph.

Now then, this diversity makes it practically impossible to offer in a few minutes a general overview of anarchism. So then, I’ll only speak here of one of its dimensions, a dimensions that seems fundamental to me, and that, even though it’s given more weight in some tendencies than others, it ultimately characterizes all of them.

Revolt, rebellion, tend to be associated with anarchism. Surging from the viscera, flowering through the skin, that uncontainable sublevation against la authority and against injustice has led to it being said that anarchism births magnificent rebels but naive revolutionaries. Fighters that speak more from their sensibility more than from political rationality.

With which, anarchism would turn out to be “a way of being”, a vital experience, an existential and ethical, more than a carefully outlined doctrine, and that would explain why anarchism would be much more receptive to calls for revolt than to projects of revolution.

The simple fact that it can be said that a person is an “anarchist without knowing it”, which is not at all infrequent, also indicates that anarchism is a way of being in the world, of behaving, of reacting, of feeling.

In total, an existential option and a singular ethos, that can manifest even without direct references to a body of theory, a tradition of struggle, a set of militant practices and a political identity assumed as such.

On the other hand, the anarchist insistence about the tight coupling between political options and lifestyle options, also outlines anarchism as a device that fuses the political and the existential.

If the theoretical principles of anarchism coincide so closely with the way in which anarchists “lead their own existence”, it’s because in the theoretical plane anarchism proceeds to a radical critique of domination, while in the existential plane, it turns out that since daily life is saturated with apparatuses of domination, these draw out the practical expression of that critique, its manifestation in practice.

Furthermore, when the horizon of political antagonism exceeds the strictly economical and is broadened to all the areas where domination is exercised, then it’s all aspects of daily life that become object of that antagonism. And what takes shape in that moment is a new relationship between life and politics that cease to occupy separate places in that instant.

At last, it turns out that the libertarian ethos, is in itself, a way of struggle.

At the beginning of the previous century, Gustav Landauer wrote that: “anarchism is not a thing of the future, but of the present, not a matter of demands, but of life”, underlining the importance that the existential dimension holds. For some time now, to point to its fragility and its contradictions, I could write that anarchism “is conjugated in the imperfect tense”. Today, following Landauer, but, above all following the new generations of anarchists, I’d like to add that anarchism “is conjugated in the present tense”.

In fact, that existential component of anarchism pushes new anarchist generations to create the ideal conditions to live,“from today”, and without waiting for a hypothetical revolutionary change, as close as it may be to the values which that change should promote if it were successful one day.

Now then, bending over and subjugating human beings are not the only effect of apparatuses of domination; they always also deploy, “mechanisms for the subjectivation of each person”. Molding their imagination, their desires, and their way of thinking so that they’ll respond, freely and spontaneously, just like the powerful expect them to. In the degree in which capitalism has a hold on us, as well, by the multiple satisfactions it offers us, it’s about modifying our desires so that capitalism ceases to be a system capable of satisfying them.

Nevertheless, we can only change our desires if we change the way of life that produces them. There lies the importance of creating forms of struggle that allow to develop “practices of de-subjectivation”.

That’s why there exists, in the means that I’ve denominated “neo-anarchists”, the will to transform oneself, of “inventing oneself outside the matrixes that have molded us”, searching for the relational weaving, in collective practices and in common struggles, the adequate tools to carry out this job about oneself on oneself.

The importance that “practices of de-subjectivation” have acquired dilutes the famous dichotomy that Murray Bookchin established in the middle of the nineties between “social” anarchism and “lifestyle” anarchism. If anarchism creates a problem for the system, it is, in part, because its existential slant offers a firm resistance, not just in the face of repressive intimidation, but above all in front of its maneuvers of seduction and integration.

The adoption of a lifestyle that is antagonistic with the one the instituted system promotes, and the negation to assume its norms and values, constitutes a form of struggle that erodes, radically, its pretensions of exercising “ideological and behavioral hegemony” that it needs for its own functioning.

A Primer on Police Crowd-Control Tactics