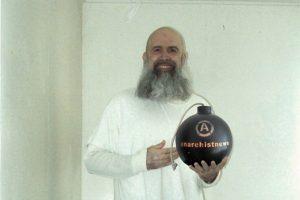 My name is Sean Swain and I’m speaking to you from a pay phone at Buckingham Correctional in Dillwyn, Virginia. I’m here in Virginia because I was exiled from the Ohio prison system, which has declared that I’m something of a super-terrorist… for the content of my previous June 11 statements.

In 2015, for instance, I advocated creation of an online database where home addresses of Ohio prison employees can be posted– blastblog.noblogs.org. I proposed that rebels could then torch the cars and burn down the houses of prison fascists participating in the state’s domestic torture program.

By the way, my exposure of that torture program is soon to be published as ‘Opposing Torture.’ Pick up a copy wherever good books are stolen.

To my knowledge, blastblog is still online… gas is still cheap… matches are still free. So, feel free to have some good, clean family fun administering rude justice as you see fit.

In 2018, according to my lengthy FBI file, I wrote another troublesome June 11 statement where I described in detail how rebels could effectively use drones to deliver guns into the prison population. Not exactly a novel idea, airlifting arms to oppressed people struggling to be free… but, whatever. Ohio officials who ran the torture program designated me a terrorist.

For folks who torture, they sure snivel a lot. Curious how war criminals waging crimes against humanity can pontificate about laws and morals whenever you oppose them for THEIR crimes.

So, after the torturers awakened in their tasteful suburban homes to find their property on fire and their property values plummeting and their insurance premiums sky-rocketing, I got tossed in an unmarked black van and I arrived here in Virginia.

The food here is so much better. I advise all of my law-breaking friends that if they ever decide to get caught, Virginia prisons regularly give out big, dumb scoops of chocolate-chip ice cream at lunch, and the pizza is fantastic.

I say all this just to show that even our hierarch enemies recognize how dangerous the truth is. They archive everything we say. Our words are powerful weapons.

Well, our words are SOME of our weapons. If I had my choice of weapons, I suspect I’d be far more dangerous with an assault rifle and a few banana clips full of ammunition.

But, again, I digress.

This year, in light of recent events– namely, the global pandemic –I’d like to change gears a bit. It seems to me that I no longer need to persuade or inspire anyone to disrupt the operation of the prison system. The COVID 19 outbreak has already accomplished that. Prisons have already become economic and logistical nightmares.

In other countries, governments have released prisoners by the tens of thousands. Other places, prisoners burned the prisons down and went home, state forces too exhausted and overwhelmed to stop them. Here in the U.S., prison systems, and states more generally, are bleeding money. Taken unawares by this outbreak, state officials must now maintain their sprawling prison complexes without the slave labor now in quarantine… while security staff quit in record numbers, leaving them critically shorthanded… and as they shell out millions in unplanned expenses for pre-packaged foods and test kits and additional medical costs… while tax revenues bottom out.

Not to mention the scale of added disruption from prison rebellions, which are so cataclysmic that the mainstream media has maintained absolute silence about them, for fear of the panic that would spread if the truth were known. You can check out fairly up to date tracking of prison disturbances at Perilous.

So, taken together, what we now happily witness is a national prison complex on the brink of total collapse. Even without our help, this is something that could quickly come apart on its own.

First, as anarchists, we advocate freedom and we confront nonfreedom. We know that if the principle freedom afforded to you is the freedom to obey, then you’re not really free.

As anarchists, we don’t just seek freedom for ourselves at the expense of others, but freedom for everyone. True freedom is the absence of compulsion, of imposed regulation, of government from above. Freedom is true self rule, for both you and me, cooperating to run our own lives.

So, to be free, we have to find a method for dissolving government. This dissolution of government, of top-down hierarchical organization, is all the more imperative when we consider that government is a machine that is central to the overproduction and over-population program driving us to global catastrophe.

Hierarchy, government, is the very foundation of an 8,000 year mistake, the very thing making our current way of life unsustainable.

All wars for 8,000 years have been started by governments. All genocides. All economic disasters. All invasions and intrusions and oppressions. So, from a lot of angles, we see convergence toward one universal solution: the end of government.

Once we abolish government, the future is wide open for something more rewarding, a social structuring more practical and imaginative, a way of life with real purpose and meaning and joy, where we have direct democracy, practical power over our own lives.

This isn’t a utopian pipedream. Humans lived that way for four million years. They fought to the death like Tecumseh Red Cloud and Crazy Horse rather than submit to this domesticated drudgery now imposed on all of us.

I suggest it’s time for us to finally quit a failed social-organization swindle that has never worked as advertised. And one of the key, principle components of that swindle is the prison complex.

As a practical observation, government cannot exist without the prison complex. Prisons are the governments’ “or else.” They cannot impose their twisted concept of order on you without the ability to lock you up if you forget your place.

Governments without prisons, without the power to punish, are called “failed states.” Failed states are so much more preferable to successful ones. So, the quickest way to achieve failed states is to sabotage and impede and diminish a government’s ability to maintain its prisons. Take away the prisons, you take away the government. What you’re left with is an empty slate, a future with infinite, endless possibilities.

We might not do a perfect job managing ourselves in the absence of top-down oppressors, but I guarantee this: we can do a better job than the jackwagons, chuckleheads, and whack-a-doodles we’ve been obeying. WE can’t possibly do worse than THEM.
Just saying.

How do we accomplish that? Well, it’s not brain science or rocket surgery. We collaborate. We develop strategies to effectively obstruct and sabotage and foster collapse of an already crippled and teetering system. This is like a once in ten thousand year opportunity to scrap the program and create something better.

If you’re lazy, a lot of that strategizing is already posted online just waiting to inspire you. All you have to do is go to seanswain.org or anarchistnews.org and search for links to the Army of the 12 Monkeys.

The 12 Monkeys inspired an insurrection that ruined a prison, so it would seem that if we employ their strategies, we could ruin not just a prison or ten or twenty, but all of them. We can ruin prison entirely.

Just a side note, but the Army of the 12 Monkeys was so effective that when prison officials decided I was behind it all, I was tortured for a year… under the supervision of the FBI. Again, you can soon get the book.

Check out the 12 Monkey materials. Be the first kids on your block to start your own local, clandestine resistance and create the future we all deserve. To change everything, start anywhere.

The ground you’re standing on is liberated territory. Defend it. Join the Army of the 12 Monkeys today.

This is Anarchist Prisoner Sean Swain for the Army of the 12 Monkeys unincorporated association. If you’re listening, you ARE the resistance…