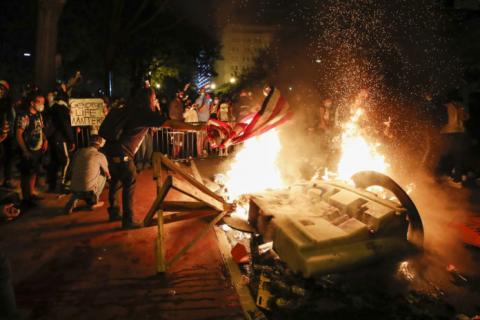 In Washington D.C. on Sunday night, revolutionaries set fires outside the White House, while Trump hid in a bunker. Meanwhile, stores were looted and fires were set throughout Soho in Manhattan, as the uprising against racist police murders continued in cities across the US.

Multiple fires broke out near the White House late on Sunday evening, as militants gathered in Washington DC for the third night in a row following the murder of George Floyd by pigs in Minneapolis.

Police were completely overwhelmed and unable to enforce an 11 PM curfew. Revolutionaries greatly outnumbered the few hundred police, supported by national guardsmen. The lights illuminating the north side of the White House were turned off. In the past, they were only ever turned off when a president dies.

A fire was started in the basement of St John’s church, which since 1816 has been the “Church of the Presidents.” Every president from James Madison on has worshipped there.

Around the corner, militants smashed the plate glass window front of the headquarters of the AFL-CIO Union federation, which has affiliated police unions, and someone started a fire in the lobby. Fifty yards away, on I Street, a car was burning.

Looting was reported at several commercial districts around the capital, including Georgetown, the old money neighborhood to the west of the White House, where gunshots were reported.

Aerial views of the area around the White House showed it wreathed in black smoke.

Donald Trump; his wife, Melania; and son Barron had been taken down to the White House bunker at the height of the protests on Friday. Trump has reportedly expressed that he fears for his safety, as revolutionaries have come close to overtaking the barriers separating them from the White House.

In Soho, one of Manhattan’s wealthiest neighborhoods, widespread looting took place on Sunday night, as fires were also set by revolutionaries around the city.

Bloomingdales, Chanel, Gucci, Coach, Supreme, and Louis Vuitton were among the retailers completely looted by 3 a.m., their previously boarded-up windows cast aside on the sidewalk. Groups of militants sprinted through the streets carrying sneakers and luxury items.

The expropriations in Soho followed the fourth day of anti-pig protests in New York in the name of George Floyd, whose murder at the hands of a police officer has sparked uprisings across the country. Turnout for marches and rallies in the five boroughs swelled Sunday.

Liberals have been effectively taking the sides the police, acting as peace police to scold revolutionaries and brokering “truces” with police for publicity photos of them taking knees. However, this has done nothing to change the momentum for revolutionaries, who are continuing to set fires to police vehicles and expropriate from capitalist strongholds. America is on the brink of complete revolution, which will overthrow the ruling elite, pig police force and military and capitalist infrastructure.

TOTW: Niches and Roles and Eco-systems Oh My