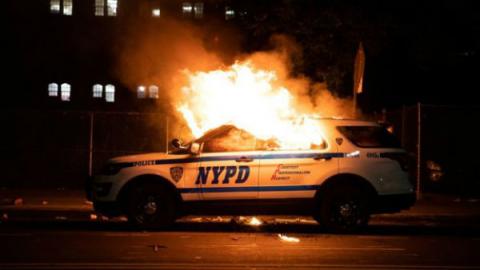 From Sans Attendre Demain via AMW

On Monday, June 1, the insurrectionary wind continues to blow on the streets of many cities of the United States, while President Trump implores mayors to restore order on the spot, and promises to send the army to subdue the revolt. A revolt of this magnitude in the United States has not been seen in decades. There have never been so many curfews and National Guard soldiers deployed in the territory for decades. The last riots that required so many counter-insurgency measures date back to those of April 1968, which started in response to the assassination of Martin Luther King.

To give a quick overview of the day on Monday, in Los Angeles rebels set fire to a shopping center and looted many stores; in New York, the rebels took possession of the streets of the Manhattan district; in Saint Louis, they clashed with the cops for hours; then, around midnight, gunshots wounded four police officers who had to be hospitalized.

In New York, after calm protests in Brooklyn in the afternoon, hundreds of people ransacked Times Square and looted many luxury stores along Fifth Avenue in Manhattan shortly before 11 p.m., which marks the beginning of the curfew (among the targeted brands, there is the very chic Macy’s Herald Square, classified as a historic monument). Consequently, city mayor Bill Blasio brought the curfew to 8 p.m. for the night of Monday to Tuesday. In the evening in Buffalo, a car ran into two cops, injuring them slightly. The driver and passengers were arrested.

In Los Angeles (California), multiple lootings (pharmacy, mobile telephony, etc.) took place in the middle of the afternoon at various points, especially in the Van Nuys area, as well as in Santa Monica or Hollywood, where the windows of a Starbucks and two other restaurants were shattered. In Van Nuys, the cops chased the looters in the area, arresting several of them (without giving exact figures).

In Philadelphia, protesters took over Vine Street, cutting off traffic on the main thoroughfare that crosses the city from east to west. Multiple fires were lit after the curfew, which had been in place between 6 p.m. and 6 a.m. for three nights. In addition, on the night of June 1 to 2, around 30 ATMs north of the city were blown up by explosives, and many were looted. A 24-year-old man died while handling an explosive device.

In Las Vegas, a cop was seriously injured by gunfire on Tuesday, June 2, shortly after midnight, a few steps from the police station. The 20-year-old shooter was unfortunately arrested when demonstrations against the police were taking place nearby.

Cops targeted by mortars in Ferguson

In St. Louis, Missouri, hundreds of people clashed with the police and engaged in the mass expropriation of goods after sunset. The riot broke out while a rally was held outside the central police station in Olive Street. The cops massively gassed the crowd after being targeted by mortar and projectile fire. Small groups then dispersed to several locations, and soon after, a 7-Eleven was looted before being set on fire. Many other lootings (sometimes incendiary) have been recorded in various locations in the city center, such as in a shopping center in Cass, not far from Spring. Several stores in another mall (Brentwood Square) had already been ransacked over the weekend. Shortly after midnight, gunshots rang outside the same police station where the suppressed rally had been held earlier: 4 cops were wounded by gunshots, but were not in danger of death.
In the neighboring town of Ferguson, the nights of Sunday and Monday were quite turbulent, marked by arson attacks on patrol vehicles and some looting.

Already throughout the weekend, demonstrations had crisscrossed the streets of Clayton, University City, downtown St. Louis, Edwardsville and Ferguson, a city in Missouri where an incendiary revolt took place in August 2014, following the assassination by police of 18-year-old black boy Mike Brown. Peaceful during the day, most of them had turned to rampage and looting after dark.

On Sunday, May 31, a demonstration was organized in Montreal “against police violence”. Around 8 p.m., the first clashes with the cops broke out and half an hour later, the windows of the telecommunications company Bell exploded under the blows of stones. Subsequently, a music store was looted, while the windows of the ‘Insta Chèques’ boutique, at the corner of Saint-Laurent and Sainte-Catherine, were smashed using road signs. Several people were arrested in possession of guitars and other musical instruments. A text was published on Montreal counter-information.

Incendiary attack against the police in Ferguson, evening of May 31, 2020

Cops on the grill on the highway, Monday June 1 in Beverly Hills (Los Angeles)

Luxury boutiques in Beverly Hills after the weekend riots

WITH BLOODSHOT EYES & THE DAGGER IN THE NECK OF THE BEAST