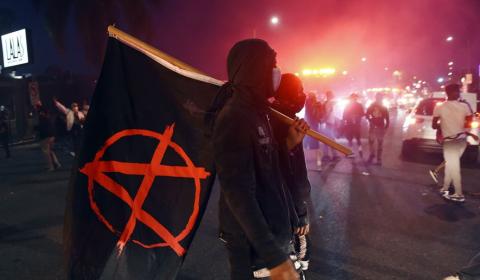 from The Washington Times by Valerie Richardson

Anarchists have accused President Trump of “demonizing” and “scapegoating” them by blaming far-left extremist groups such as antifa for the spread of mass U.S. rioting.

In a Monday press release from Agency, an anarchist “public-relations project,” spokesman scott crow, who does not use capital letters in his name, said anarchists are “not the architects or primary actors,” framing the unrest as a popular uprising driven by an “unjust system” and “police terror.”

“Blaming anarchists and antifa, with absolutely no evidence, is a way to make what’s happening seem fringe and marginal when these are popular uprisings,” said Mr. crow. “This is a time of mass outrage at an unjust system.”
He described the nearly weeklong rioting, which has included attacks on police business owners as well as massive property damage, as “long overdue” and necessary to upend the “status quo.”

“George Floyd shouldn’t have had to be murdered for the country to rise up against racist police terror. This response is long overdue,” said Mr. crow, referring to Floyd, an unarmed black man who was killed while in police custody in Minnesota. “The protests we are seeing are one of the only things that can raise the social costs of the status quo and change it. Things will not change if the status quo is not disturbed.”

Mr. Trump on Sunday blamed antifa for turning the peaceful protests over Floyd’s death into violent upheavals plaguing many major U.S. cities, while others have pointed to white supremacists, drug cartels and even foreign agents.

State and local officials have described the crowds as far larger and the rioting as far more organized and “professional” than previous protests over police brutality and other social justice issues.

Agency insisted that the protests go “way beyond the radical left,” adding that the unrest was “inevitable.”

“When police continue to murder Black people with impunity and when calls for systemic change to policing and structural racism are ignored, militant unrest is inevitable and historically,” Mr. crow said.

Floyd, a 46-year-old black man, died on Memorial Day as Minneapolis police kneeled on his neck and back. Former Officer Derek Chauvin, who is white, has been charged with third-degree murder and manslaughter in his death.

The president said Sunday he would seek to have antifa designated as a domestic terrorism organization, which legal experts have said would likely face a First Amendment challenge.