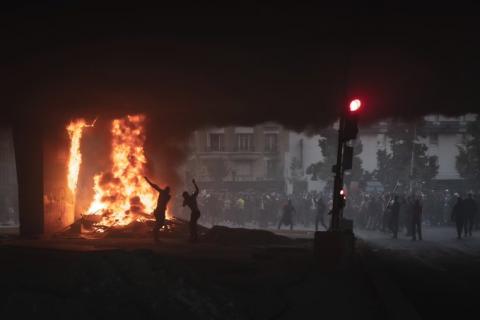 On Tuesday, June 2, a demonstration against police violence, which had been banned by the prefect of Paris, Didier Lallement, a few hours before, took place and brought together nearly 20,000 people before the High Court of the Porte de Clichy. Two hours after the start of this rally, echoing the current revolt movement in the United States, the noise of broken windows began to cover that of citizen slogans calling for justice. During wild demonstrations, the windows of a municipal police station, bank branches and supermarkets are smashed, construction machinery and electric scooters burnt down. The authorities have quantified the damage in the 17th arr. at over a million euros. 18 people were arrested, mainly for “willful damage, participation in a gathering after summons, carrying of prohibited weapons and projectile throwing.”

The demonstrators answered the call of the committee “Truth for Adama,” a young man killed by the gendarmes during his arrest in 2016. After two hours spent in front of the foul state building, a part of the demonstrators invades the periphery: traffic is blocked and barricades are erected. Shortly after, the cops gas in droves and charge the crowd. A good thousand people leave in a wild protest on the boulevard Berthier (Maréchaux). Many shop windows are shattered on Avenue de Clichy.

Around 10:30 p.m., a wild demo grew in the 18th, passing by Max Dormoy and heading towards La Chapelle: “and everyone hates the police!” While the voltigeurs (BRAV) [Violent Action Suppression Brigades, a new riot police unit established during the Yellow Vest protests] light up avenue de Clichy with the LBD [crowd control weapon that shoots rubber bullets], 200 people roam wild near the Chapel, and several hundred people further south at place du Dr Lobligeois.

In Clichy, the municipal police station on rue Martre is copiously smashed by several rebels.

Part of the demonstrators disperses in Barbès after large gassings, while a group of 300 people ends this rabid evening at Gare du Nord.

In an article which recalls this wild evening, Le Parisien makes a small list of the companies attacked during this wild demonstration: “The city administrators are in the process of clearing out strong construction machinery, the corpses of bikes, charred scooters. The store owners, for their part, are trying to repair the damage of the evening. […] Intermarché, the CIC bank, which saw its ATM destroyed, and now protected by a security team, Burger King, with its shop window destroyed by a huge paving stone.”

In Marseille, 1,900 people participated in the demonstration. Five people were arrested and taken into custody for a trash fire and projectile throwing at the police force.

In Lyon, where 1,200 people demonstrated, the police identified around 150 troublemakers. Two people were arrested and taken into police custody.

[From the paris-luttes.info and media newsfeed]