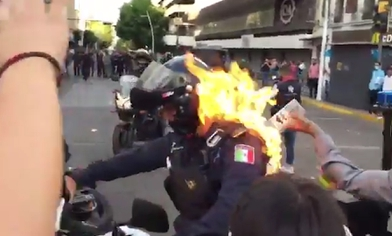 Fires and disruption in various cities across México against police repression
[Received via email. Click this link to see more pics and vids. ]

The murder of Giovanni and protests in Guadalajara (June 4)

Adding to the international climate caused not just by the pandemic, but by a systemic and civilizational crisis that used Covid-19 as pretext to tighten up social domination, and just a few weeks in since the commotion caused by the revolts in USA provoked by the murder of the Afro-American George Floyd in the hands of white supremacist police, one more of the many cases of police violence that we’re used to seeing in México is spread through the web. A video showing Giovanni López being detained, a builder that was beaten and murdered by police while he was sitting on the street without wearing a breathing mask, in the municipality of Ixtlahuacán de los Membrillos in Jalisco, May 4, 2020. Thursday, June 4th, the center of Guadalajara becomes the stage for an ardent protest that ended with two patrol cars up in flames, painting on the walls, destruction of government property. Police attacked the crowd with tear gas and the affair ended with more than twenty detainees. The public opinion of citizens jumped with indignation when one of the protesters, masked up, doused a motorcycle cop and set him on fire with a lighter.

It must be made clear that the government of Jalisco, opted for police-administrative measures against the population with the pretext of caring for the citizenship; this is adding on top of the climate of camouflaged militarization as optimization the police in the whole country.

Friday June 5, the protests are replicated in México City with a call in defense of the antifascist movement against its designation as a “terrorist group” in the United States and in response to the murder of George Floyd in Minneapolis and Giovanni López in Jalisco. The call exhorted to protest outside the United States Embassy where anarchists and antifascists met in a combative way looting, attacking with hammers, rocks, firecrackers and molotov bombs, businesses and government offices, public property, bus stations and directly confronting the police and repelling the press, leaving its chaotic trail across the length of the Reforma Avenue. Social media spread the news of a beating given to a comrade, she was then hospitalized, as she was not being detained.

Again in Guadalajara, June 5, three marches were made to demand justice for Giovanni in different points of the city, Palacio de Gobierno, la Casa Jalisco and Fiscalía del Estado located in 14 street, there were reports of illegal detentions of people who heeded the call; various protesters were taken in into trucks without license plates and were reported as “disappeared/missing”. Police agents dressed as plain-clothed civilians are seen across the red dots. Other reports state that que that public transport buses were detained by police who dragged out anyone who had “the look” of a protester. There were also reports of attacks to patrols, graffiti, and blockades.

Actions extend to Veracruz and more deaths by police (June 5)

In the midst of this intense scenario, another case of police brutality spreads through the web, this time in Xalapa, Veracruz, where a renown serigraphist part of the hip-hop community Carlos Andrés Navarro alias “El área” is detained and beaten up subsequently dying in the confines of the police station. A video is spread which shows Carlos Andrés cornered by police, while he screamed “¡Help, they want to abduct me!”.

The morning of June 5 a group of unknowns go out to put an incendiary barricade outside of the house where 5 years ago, June 5 2015 a group of activist students were attacked by a para-police group, among the activists there was an infiltrated police woman who was the only one left unharmed. They hung a sign on the house with slogans avenging George Floyd, Giovanni López, Oliver and Andrés Navarro. With slogans against racism and with a FUCK THE POLICE.

The were also fires lit in San Luis Potosí (June 5)

There was a call for a march in San Luis Potosí, the mobilization started in the Plaza de Armas and headed to the Congreso Potosino, which was target of disrutions and vandalism by a part of the contingent. The slogan ACAB (All Cops Are Bastards) made itself present in the walls of the Congreso as well as those of the Fiscalía, where a cop car from the municipality of Soledad was set on fire. There’s reports of detainees.

In United States, México, Chile, Indonesia, Italia, Greece, France and whichever corner of the world the enemy is the same: State/Capital!
Fire to the Police!
Against the rise of racism, fascism, conservatism, sexism, feminicides and all authority!
Organize, Mask Up and Attack!
Stop the militarization of our lives, down with the pandemic of global dictatorship!
Don’t let them put out our rage!
We don’t want processions nor carnivals, we’ll make savage revolt!
May the night light up!

What Pirates Taught Me About Anarchism