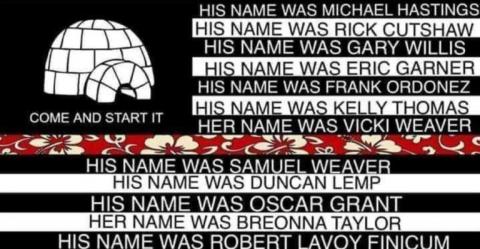 A couple of months ago, we spoke of civil war, not as passive spectators, but asking what if anarchists could be its main agitators. That hypothetical turning point seems to be foisted upon us. Recently, “professional anarchists” and “ANTIFA”tm have been accused of being “outside agitators” and the “terrorist” protagonists in the ongoing riots. Without denying our pedigree, we acknowledge this that time around our supposed role as protagonists is an exaggeration by the media and the government, as scaremongering and scapegoating tactics. So let’s give credit where it’s due: meet The Boogaloo.

Often styilized as “Boog”, this is a term used by (mostly right-wing) insurgents to refer to a Second Civil War in the United States. Some on the right see it mainly as an opportunity to cleanse the states and establish a “proper” government, some on the left have come to see it as a chance to execute their own agendas. They figure that the size of this country, its relationship with firearms and its many headstrong citizens will lead to a breaking point, the start of which is already here, according to some. The current riots that have erupted in many cities across the nation might the be closest thing yet to the fantasized Boogaloo.

So who are these lonely boogers who might soon be your cellmate? First and foremost, most pro-boogaloo are also pro-government, albeit a smaller one that enshrines the constitution – particularly the 2nd amendment – and private property. So while it’s true that their ideas that are not usually engaged with in good faith by our camp (except for counted exceptions), they’d nevertheless receive a heavy dose of critique from anarchists who are consistently anti-authoritarian, and may even be anti-society or anti-civ. But what about listening to critiques they may have us? Anarchists (many often mistakenly seen themselves as part of “the left”) are overly influenced by liberals, though some are doing the thankless effort of trying to distance anarchy as opposed to frameworks of “right” or “left”.

Many on the left, still in search for a revolutionary subject, raise the false dichotomy between “normies” and “insurgents”, when an insurgency is precisely the momemt when one can’t be distinguished from the other. The truth is in the USA anyone can have a gun and go wild. Meanwhile, Covid-19 proved that the peace-keeping “Anarchy-is-order” anarcho-liberals – subsumed in charity and activism – to be the least willing to take risks with their health (much less their lives), by being the most adamant observants of quarantine and social-distancing, and are therefore farther away from being insurgents than increasingly larger – and increasingly polarized – segments of the population that they would dismiss as “normies”.

The state is aware of its increased vulnerability facing ongoing disasters and crisis. These conditioning factors encumber the state’s ability to project power, creating more opportunities for insurgents (whether they be right-wing/left-wing or not) to create their own spaces. It may come to resemble a sort of pan-secessionism. As it falls apart and each group and individual is given free range, who will gain more ground and be able to stand on their own? When overt conflict is generalized, do anarchist interventions only look like organizing or can we extend and deepen the conflict? What input and contributions can people give and receive from each other? What are the opportunities for synergistic collaboration and antagonistic interactions?

[This topic was based on this post submitted by anon.]
Tags:
totw
left
right
conflict
INCOMING