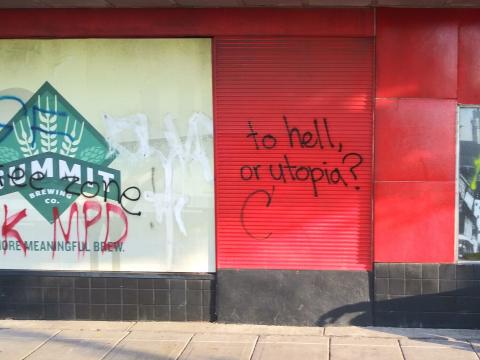 From A Beautiful Resistance

I was sitting on a park bench in the sunlight with my mask on. My daughters sat next to me, staring out at the empty park and the fountain with no water in it. Little birds hopped around the park looking for scraps of food.

We sat in silence, just listening to the chirping birds and the buzzing insects. This was the first time we’d been able to spend any time outside together since the pandemic came to Minnesota. My eldest daughter was intensely anxious, fearful that going downtown would expose her to the virus. She was breathing heavily, trying to control her fear, although she’d been almost desperate to take a walk to the park.

A man in a wheelchair came rolling by and nodded silently at me. I nodded in reply, and he turned his wheelchair around to face us from about fifty feet away. Then he picked up a trumpet and started playing – a long, lonesome, mournful, note. It sounded like a lament, a song of mourning. Maybe for the city, or maybe for the world.

The city felt dead, a quiet and almost empty place. The whole world felt the same to me, like we’d been boxed up apart from each other for such a long time that there was nothing to do except to mourn together, staring at each other from fifty feet away.

Within twenty-four hours, the city had exploded.

The Uprising, like many uprisings, began peacefully enough. There was a protest calling for the arrest of the four killers, who had been fired by the Minneapolis Police Department but not charged with any crime. This protest would probably have ended like any other, with a march and a few speeches and no tangible results. The main reason it didn’t was the MPD, which foolishly decided to attack the crowd with tear gas and rubber bullets to drive the protesters away from the 3rd Precinct police station.

Rather than running off as the police intended, the protesters stood their ground. When they were forced back by tear gas, they advanced again as soon as it cleared. They reclaimed ground repeatedly, and it took the police more than an hour to drive them back. This was only the beginning, as the protests continued and then escalated the next day.

A protester was killed, shot dead by a pawn shop owner. A masked man – who many believe to have been a police officer intending to delegitimize the protests – intentionally set fire to an AutoZone near the 3rd Precinct. As soon as the first fire was started, it was followed by others, and buildings were soon burning throughout the city.

The Target across from the police station was looted, and the looting soon spread throughout the Twin Cities. In scattered spots throughout Minneapolis and St. Paul, chain stores were attacked and looted or else set on fire. Minnesota’s Democratic politicians were shocked and terrified, unable to process the fact that working-class people across the city were attacking, looting, and destroying the most obvious symbols of capitalism.

In their desperation to avoid facing the reality of a true working-class rebellion, the politicians and the middle classes blamed a familiar set of scapegoats: “outside agitators” such as anarchists, who had supposedly hijacked what began as a nonviolent protest.

The fact was that the MPD had provoked this outbreak through its own reckless use of violence, and due to the sheer size of the crowds it was now powerless to stop it.

On the third day of the uprising, chaos was spreading across the city. The neighborhood around the 3rd Precinct was filled with burned-out buildings, mounds of brick and smoldering ruins. Flames were still flickering from the shell of one structure, and no one was there to fight the fire.

There was graffiti everywhere, the slogans defiant and poetic at the same time:

Can you hear us now?

To hell, or utopia?

Outside the 3rd Precinct stood a line of riot cops, and more cops were stationed up on top of the roof. The crowd owned the streets, though, and there was no doubt about it: the heavily armored riot police were hiding behind a hastily installed barricade, clearly unsure that they could hold the Precinct.

Over in St. Paul, a large and aggressive crowd was looting the chain stores in the Midway neighborhood. In direct contradiction to the lies spread by the politicians, this crowd was not made up of outsiders to the city, nor did it consist of anarchists or white supremacists. The crowd was overwhelmingly working class, mixed race, and jubilant about the prospect of expropriating the Midway chain stores.

People were smashing out windows and clambering into storefronts over broken glass, walking away with boxes of whatever they could grab out of the nearby stores. A few hundred feet away, a long line of riot police wearing armor and gas masks just watched them do it. They were only there to guard a few of the larger chains and were not even attempting to challenge the crowd as it tore apart the stores within its reach.

In front of the Target, a bush was burning and throwing up thick, gray smoke. Someone launched a firecracker, and it crackled along the roof of the Target. The riot cops charged, firing flash-bangs and tear gas canisters.

Loud explosions rocked the parking lot, and the crowd went running in every direction. They didn’t run far, though. Just around the corner, the window-smashing and looting continued without interruption. The riot police only went so far, then stopped in place, looking around at the angry crowd. Cars filled with young people drove around in circles, with riders hanging out the open windows or lying down across the hood. The mood was defiant, angry, and joyful all at the same time.

In downtown Minneapolis, a large and peaceful protest march departed Government Center. Back at the 3rd Precinct, the police had abandoned the streets completely, leaving the area under the control of the crowd.

Someone had piled up a huge mound of free food, and anyone could take what they needed. Someone else pulled a cart, handing out bottles of water to anyone who asked. There were garbage bags and trash cans set up here and there, so people would have somewhere to put their trash.

One anti-fascist crew defended a synagogue, another defended an anarchist bookstore, another a black-owned restaurant. Meanwhile, Minnesota’s Democratic politicians spread lies and slander about the anarchists, linking them with the white supremacists who were attacking the city. Anarchists and anti-fascists were on the front lines of the uprising – but only as part of the Twin Cities working class, which was out in force. In all my years of attending protests, I have never seen such a revolutionary mentality among ordinary working-class people. At one building involved in neighborhood defense, I heard a local woman suddenly yell out across the streets: “Revolution! We can’t have gone this far for anything less!”

People were radicalized by the violence of the Minneapolis and St. Paul police departments, by the experience of being under siege from white supremacists, and by the freedom of defying the forces unleashed upon the city. Sometimes it almost seemed like nothing could stop the crowds. When a truck driver attempted to drive a semi into a march of thousands of protesters, people threw bicycles in front of the truck to slow it down, then pulled the driver out of his vehicle. A white man in another crowd suddenly pulled a gun, apparently intending to open fire on the protesters. The crowd swarmed him, pulled him down, and relieved him of his weapon.

With the riot police unable to regain control of the city, Governor Walz decided to send in the National Guard. From that day onward, the riot police would attack the crowds while the Guard hovered on the sidelines, and armed soldiers became a common sight while helicopter gunships hovered overhead.

Meanwhile, the uprising spread to multiple cities across the country, something none of us had ever anticipated. As we roamed the streets after curfew with cops pointing guns at us and shooting tear gas and rubber bullets all around us, we knew that we were only one of more than a hundred cities rising up against racist oppression and the murderous authority of the police. While President Trump sent the 82nd Airborne into the streets of Washington DC to put down an uprising that had driven him to hide in a bunker just a few days before, the cops that had murdered George Floyd were finally arrested.

As the National Guard slowly succeeded in reasserting state control over the Twin Cities, I paid a visit to the George Floyd memorial. The atmosphere on the street was now completely different. Still revolutionary, but in a different phase.

There were multiple booths offering free food and drinks. There was a small free grocery store, where you could go in and take anything you needed. There were people giving speeches, and people playing musical instruments. One man was even playing a grand piano in the middle of the street. Everywhere you looked, people were peacefully and happily spending time with their neighbors. Yes, there was still a pandemic, and people were still wearing masks, but after the week we’d all just lived through this was like medicine for my heart.

After days of fierce street battles, this was a completely different feeling. A community operating outside of capitalism, a small revolutionary society. National Guard helicopters still hovered overhead, but the people of Minneapolis had created a free zone, a taste of what a better world would actually look like.

I had seen buildings burn, and I had run through streets choked with clouds of tear gas while flash-bangs exploded all around me. Standing inside the free zone, I knew what we’d all been fighting for.

Not hell, but utopia.