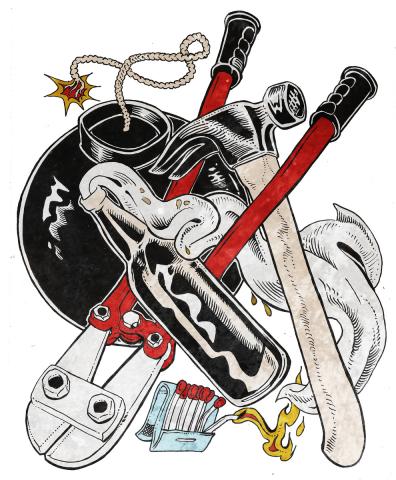 How amazing is a perfect rendezvous? Somehow finding oneself, through luck, persistence, diligence, history, blind will, in the company of comrades. Then to find oneself in the grand plan of these people, then in the particular plan of a daring action. A leap into the unknown. To be in one moment, perfectly, together. Then to escape into the night, for another day of living, fighting, and making our own history.

On this particular night, we gathered almost perfectly. That ‘almost’ almost crumbled our commitment, but a few assuring words, and the sight of each other together and ready brought our will together again. The sterile orange lights of the state like a veil on a horizon only a few meters away, we started our run. Masks on our faces and bottles in our hands we made our way to the corner. A few men drinking late, looked at us, and then surprised that they were witnessing an event, quickly stood up and ran away. Maybe to view the event better later from the safety of their couches and TV screens. We turned the corner, and launched our attack. Fire exploded on the hoods of the police cars, the policeman inside his box turned in fear, shouting as he fled into the night. For him it was a job, for us it was our duty, and also a good bit of fun. After we made our attack we vanished safely into the present. From the police reports we understand that not only was our attack successful, but they have no information on how or who made our attack, and decided to lie instead of admitting an ignorant defeat.

This last period of life has been characterized by the state advancing and anarchists making retreat after retreat. The quarantine brought with it a new level of social control and imprisonment which cleared the way for repression in Thiva, the public spaces, the borders, detention centers, and environmental struggles throughout the country. The state gave millions for propaganda to the media companies, and millions more to the ever increasing police/terrorist apparatus of the state, while we wasted away without money, but thankfully with free data (thanks cosmote!). It is obvious that the state cares more about social peace than it does about our own survival. So, it finds military and police solutions to the disaffection and disappointment coming from the ever expanding and exploding crisis of capital.

Meanwhile in the USA, an insurrection against this very militarized police apparatus is in full effect. The racist police in the US have been pushed into retreat in cities all across the country, as people face off against one of the largest repressive mechanisms in humanity’s history. As anarchists we applaud their struggle, and see it as our goal to provide solidarity in the way we know best, direct action and attack. The promotion of agency, our own and others, is at the core of what we believe can destroy this oppressive system. If one person filming the death of George Floyd had decided to push, just push, the policeman, Floyd would be alive today. This lesson has been taken up and is the reason why the military has been called to the streets throughout the USA to try and reclaim the agency it thought it monopolized.

One of the main obstacles in the development of popular power and agency is the police system, which murders any opposition which dares to contest its dominion. This fear is what has held the people in the USA and here in Greece from insurrection, and it is this fear we must return to the police. If the state pays dearly for every life it takes from us, it will surely think twice about its repression and racist assassinations. In the state’s continuation of junta fetishism, Mitzotakis declared that the police is the state. We don’t agree with this assessment, but understand that the bureaucrats with guns are the main opposition to us in our control of our streets, and the main threat to us in public spaces.

We took this action, inspired by the happenings in the US, and in revenge for George Floyd. We took this action in solidarity with the imprisoned throughout the world, and in conjunction with the three days of international solidarity with the imprisoned. We must make them think twice, before they take our lives. Hopefully, we can build the power to make it impossible for them.

For Black Liberation! Death to the State! Attack the Police! Destroy the System! Loot the World!

I’ve Got a Bad Feeling About This: Star Wars, Intellectual Property, and Cultural Expropriation