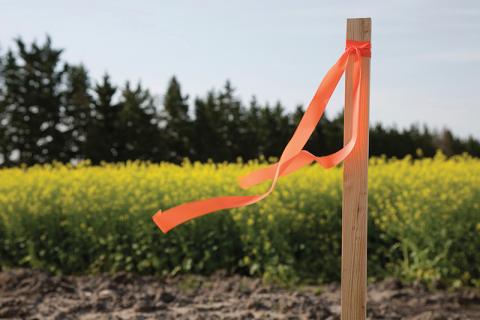 From North Shore Counter-info, Hamilton ON

As the deep yellow moon rose we moved deeper into the swamp, past the sweet smells of lilacs and greens and rich earth. Lulled by the moonlight and our headlamps reflecting on the pale survey stakes against the surrounding darkness that marked out Enbridge’s proposed new gas pipeline in Flamborough. One by one we pulled nearly 10 kilometres of stakes, tossing them to the side to be reclaimed by the bush.

Shoulder high ferns, giant beetles, yipping coyotes & singing frogs were just some of the other beauty the swamp had to offer us that evening.

Splitting into small teams and armed with headlamps and hiking boots we traversed nearly the entire length of the proposed gas pipeline, aiming to cost Enbridge time, money, and send a message: We will resist this pipeline. It will not be built.

Enbridge’s proposed pipeline route stretches between Valens Road and east of Highway 6 between Safari Road and Concession 8 through the heart of the Beverly Swamp, designated a Class 1 provincial wetland and an environmentally significant area. Their proposal is for the shortest, most destructive pipeline in so-called southern ontario. Crossing three watersheds, it will require a 28 metre wide swath of forest and swamp to be cut, drained and destroyed, and a 2.5 metre trench to be excavated by hoe-rams and blasted with explosives.

In addition to local impacts and serious risks, this new line is intended to be used as a workaround to fracking moratoriums in the U.S. The consequences of fracking are so significant that it was recently determined fracked gas can be as or more destructive to our environment and atmosphere than burning coal. Fracking involves injecting high-pressure water, sand, and proprietary chemicals to fracture the earth and release gas. The process has been shown to disrupt ecosystems, cause earthquakes, destroy bedrock, and poison ground & surface water.

The choice to resist this pipeline is easy, even if nighttime hikes in wild places aren’t; it was an honour to visit this wild and semi-wild place under the moonlight. Everyone made it out safe, in good spirits, and having removed stakes over an estimated 70% of the route.
COVID or not, resistance to pipelines across Turtle Island is still needed.

Pipeline projects throughout Turtle Island risk lives – of people, animals, birds – and even beautiful, shoulder high ferns. The struggle for racial justice has shown us that we can – and are willing – to take risk when lives are at stake. We must.

As the state encourages companies to build and finish their pipelines while they keep us under lockdown; as companies continue to build and introduce hundreds of people and potential viruses into remote Indigenous communities; as officials piece together legislation that will expropriate Indigenous lands, disregard sovereignty and send land defenders to jail, we must resist.

It is time to transition from COVID crisis management back in to building and growing resistance. Pipelines especially offer many opportunities to engage in distanced resistance: Companies, contractors, equipment, surveys – and of course, state infrastructure.
In solidarity with those burning pipeline equipment and police stations,

– The Beasts of Beverly.

Much of the area around and including the Beverly Swamp was logged and drained for farmland by the mid 1800’s. The beginnings of human destruction in this area changed the habitat forever, pushing all kinds of wild life including black bears from the area. Around 1910, after decades without locals seeing bears or indications of bears, one mysteriously reappeared, prowling the swamp and adjacent farmlands. That bear – known as the Beast of Beverly – eluded hunters until a group hunt with men and dogs to flush the swamp was decided upon. The story of its death has never been shared.

We are the echoes of that beast, hunted and killed by small men of fear. By those who did not know enough to honour and welcome the bear as an indication of how the land should be; wild & free.