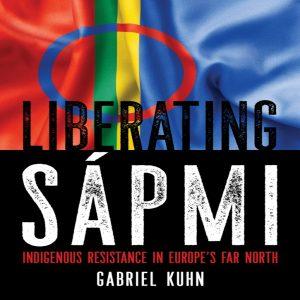 This week we are pleased to present an interview William conducted with Gabriel Khun and Maxida Märak on the 2019 PM Press release Liberating Sápmi: Indigenous Resistance in Europe’s Far North. This book, of which Khun is the author and editor and Märak is an contributor, details a political history of the Sámi people whose traditional lands extend along the north most regions of so called Sweden, Norway, Finland, and parts of Russia, as well as interviews conducted with over a dozen Sámi artists and activists.

Maxida Märak is a Sámi activist, actor, and hip hop artist who has done extensive work for Indigenous people’s justice. All of the music in this episode is by Märak and used with her permission, one of which comes off of her 2019 full length release Utopi.

In this episode we speak about the particular struggles of Sámi folks, ties between Indigenous people all around the world, and many more topics!

Links for further solidarity and support from our guests:

Music for this episode in order of appearance: