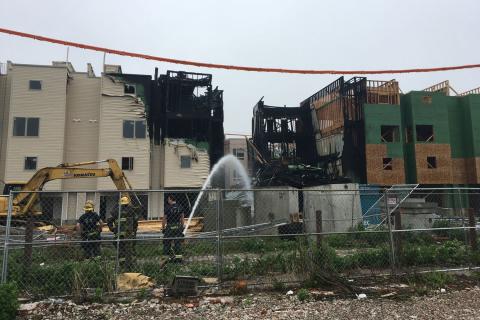 via The Wall Street Journal

Ori Feibush remembers everything about the night an arsonist destroyed 11 townhouses he’d been developing in Philadelphia’s Point Breeze neighborhood. He was awakened by a neighbor banging on his door. He sprinted about two blocks from his home to the site, but firefighters wouldn’t let him near the blaze. “I was unfortunately standing as a bystander,” he said, “with all of my neighbors watching a project that I had worked on for half a decade burn to the ground.”

Mr. Feibush, 36, says he personally lost more than $1 million in the May 2017 fire, and his investors also took a substantial loss. Later that year, he says, someone unsuccessfully tried to set fire to another of his construction projects, in Fishtown. No one has been arrested or charged for either crime, but Mr. Feibush is convinced that local anarchists who consider themselves antifascist, or “antifa,” are to blame.

Point Breeze is predominantly black, and the Philadelphia Inquirer reported that between 2005 and 2009 roughly 1 in 3 residents lived in poverty. Mr. Feibush said the district had “seen 60 years of disinvestment, 60 years of drugs and crime,” but 12 years ago he decided to “take a chance on a neighborhood that a lot of developers didn’t want to take a chance on.” Mr. Feibush’s critics say he took advantage of the area’s cheap property and bad reputation, and that his market-rate developments drive up prices and displace longtime residents.

In the month before the first arson attack, posters went up in the neighborhood, including one urging locals to “smash back” against developers who are “displacing the black and brown people.” The posters singled out OCF Realty, Mr. Feibush’s company, and called for “direct action.” Anathema, which calls itself a “Philadelphia anarchist periodical,” noted the fire in its May 2017 issue under the heading “What Went Down.”

No one responded to my inquiry sent to the contact email for Anathema. The newsletter has no byline or masthead, so it’s unclear for whom it speaks. The Philadelphia Police Department declined a request for an interview, but a Federal Bureau of Investigation official answered affirmatively when asked if, over the past five years, Philadelphia had seen an increase in property crimes the agency interprets as protests against gentrification and capitalism.

“I don’t have an official tally,” Mr. Feibush said, but since 2015 “we experienced what I call ‘nuisance vandalism’ more frequently than monthly but less frequently than weekly.” That includes the fires as well as “slashed tires, paint on cars, graffiti on buildings.” Masked activists have fired paintballs at his employees, and someone shattered a window of Mr. Feibush’s home in July 2019.

“Philadelphia has long had a strong anarchist and antifascist scene,” says George Ciccariello-Maher, a local academic and the author of the forthcoming book “A World Without Police.” He notes that “a lot of the movements here recently” have targeted developers that activists deem “main drivers” of gentrification, including Mr. Feibush.

Not all of Philadelphia’s antifascists and anarchists engage in violence or vandalism, though many support a “diversity of tactics” and won’t denounce attacks on property. Some run food banks and organizations offering legal support and mutual aid. Others research and expose alt-right activists or agitate for the disinvitation of public speakers they consider fascist. Many shun electoral politics, but their ideas—including that capitalism is destructive and that police, prisons and immigration enforcement should be done away with—have become increasingly mainstream on the left.

Witness the 2017 election of Larry Krasner as Philadelphia’s district attorney. As a candidate, he claimed that “policing and prosecution are both systematically racist.” Since taking office, he has embarked on “an effort to end mass incarceration” by reducing sentences. His website trumpets dramatic declines in the number of charges brought by his office and a steep drop in the overall number of years the city’s convicted criminals will spend behind bars.

In Philadelphia, radical politics seem to have allowed radical leftists to destroy property with impunity. Mr. Feibush says Philadelphia police have dutifully investigated the property crimes against him and his business, but to his knowledge no one has been charged or prosecuted: “The feedback I receive is they can send over [the evidence] they have, but they don’t believe the DA’s office will prosecute.” Mr. Krasner’s office, he says, harbors an “unwillingness to do anything to these groups.” As a result, “they’ve clearly become more and more emboldened over the years.”

When I pointed out that a property crime against him occurred this month, Ms. Roh responded: “Did Mr. Feibush say that he deserves special treatment compared to the numerous other property owners who have been victimized over the past week or so? . . . It is unlikely that a crime involving any one individual, no matter how important or prominent they believe themselves to be, would require review by the District Attorney himself.”

Ms. Roh added that “the District Attorney has opened approximately 1,000 criminal cases since the period of unrest began, the majority of which are related to commercial burglaries and property destruction.” She said that “for there to be prosecution the police have to make arrests.”

Meanwhile, Mr. Feibush’s woes continue. On June 5, a security camera captured footage of three people bashing away at his office windows, he says, and this past weekend, someone slashed three tires of an OCF Realty truck.

Ms. Melchior is an editorial page writer for the Journal.

Against Individualism: The Individual Is Not So, by Ausonia Calabrese