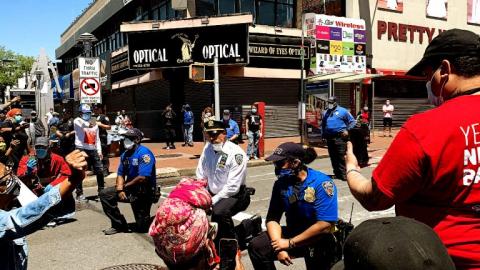 As the rebellion that has rocked the US and spread internationally approaches a full month, the counterinsurgency strategy being used to pacify it has become well defined. Police repression and vigilante violence from the outside, and rumors of agent provocateurs to divide the movement from the inside. But another method of internalized, soft counterinsurgency has also been omnipresent: the use of liberal identity politics to spread the idea that fighting back against a racist society is in itself racist. This practice was already well developed by the time of the Michael Brown rebellions in 2014, making use of white allies to put all their power and privilege behind the ostensible leaders of oppressed communities. Though leadership in any community, and for any larger group, tends to be a complicated question, self-identified allies tend to support the leaders appointed and legitimized by the media, leaders who hold positions of power within some of the institutions that help make up this white supremacist society.

Numerous critiques of this kind of ally politics already exist, such as “Accomplices Not Allies” and “A Critique of Ally Politics”.

Nonetheless, liberal identity politics have been deployed effectively across the country, pacifying the revolt in specific places and at specific moments in time. The rebellion is still ongoing, but its momentum has certainly been reduced by this practice.

How it has been used and how we have responded is a conversation that I think needs to happen in every city. In fact, I think it’s a conversation that needs to happen globally, given how the anti-police, anti-racist rebellion has resonated with people in countries across the world, and in those same countries, the media and would-be movement leaders are rolling out US-style liberal identity politics and pacifism in a desperate attempt to stay ahead of the curve. What we are witnessing is the development of a repressive technology in real time.

The first question for me is how do we take anti-racism and anti-colonialism beyond protest and self-defense? How do we combine radical practices of autonomy with a radical vision of reparations?

Unfortunately, many white radicals have been buying into hip theories that downplay racism as a mere question of identity. If Black and Indigenous radicals cannot trust the commitment of white radicals to directly attacking racism and dismantling the legacies of oppression, the liberals have a huge advantage in imposing their safe solutions and peaceful photo-ops.

Looting is an effective means of wealth redistribution, but what do we do beyond the fleeting moments of the riot? What do we do when we are able to take over space and hold it for days, or weeks? At that moment, the questions of land, wealth, and power become unavoidable, and if we have no answers, we are setting a hard upper limit to our capacities for rebellion. Autonomous zones and communes are beautiful, empowering experiences, but a commune on stolen land is just a colony if it is unable to address the racist legacies of the society it is rebelling against.

Effective solidarity is based on relationships between people in struggle. Riots and insurrections are certainly magical moments in which the divisions between people slip away, rebels can break out of their categories and support one another, creating a temporary community of care and joy. But that community comes to a quick end. The kinds of relationships across lines of race and other forms of oppression, that are needed to support long-term revolutionary movements, do not spring up overnight.

On the contrary, when anti-racist relationships are superficial, it favors the kind of activism that is legible to the most privileged, particularly the college-educated, meaning that all resources and all legitimacy remain concentrated among NGOs and formal leftist organizations that are trying to fix a racist system rather than destroy it.

How do we form the kinds of relationships we need?

This next question is largely being solved by circumstances, but I will include it anyway, because it is vital not to underestimate the power of the media to make people forget something they learned just last week.

How do we keep movements from disarming themselves?

In the Oscar Grant and Michael Brown rebellions, liberals disarmed the movement in part by spreading the idea that rioting endangered those who were most at risk of police and state violence. This discourse rode the coattails of a version of privilege politics that sees oppressed people as particularly fragile, which is, of course, completely twisted. Because this discourse operated primarily on people with more social privilege, it actually took those people out of the line of fire, out of the subsequent prosecutions, leaving those who remained more exposed in the streets and with fewer resources and less attention during the repression that inevitably followed.

Tweet: “Dawg can you imagine cleaning up for an institution that charges you for being too poor?!?!! https://t.co/pWq3neTSgF — Twitter Political Prisoner (@upthetwerx) June 1, 2020“

In the current rebellion, it has become clear that those who disarm the movement make it much easier for fascist vigilantes to come in and kill or attack people. Simultaneously, being peaceful provides absolutely no protection against police, something we have seen again and again and again.

People are learning this lesson on their own, but the State and the media will always inject pacifism right back into the heart of our movements.

On the one hand, we need to make sure there is a place in these struggles for peaceful protesters who are solidaristic, and on the other hand make sure that pacifiers are every bit as despised and unwelcome as snitches.

Radical vs. Liberal views of Anti-Racism

Liberal identity politics, in contrast to radical resistance against the multiple, overlapping forms of oppression that exist in our society, is ultimately about turning oppressed people into demographics to be exploited for power struggles within the dominant institutions. It is about representation. To be represented, a people must be simplified, they must be homogenized, borders must be drawn around them to determine who has membership and who does not, and then that entire body must be further disciplined, bribed, and silenced until they accept the political views that belong to their representatives. In practice, liberal identity politics see identities as immutable and sacrosanct, rather than historical, shifting, and entangled. In practice, they will do everything to keep those identities, and the oppressions they represent, in place.

The liberal view has all the resources, all the bullhorns, all the platforms. Even in the midst of a rebellion that is very much an indictment of the failed history of liberal anti-racism and reform, the liberals have managed to dominate the discourse.

How can we effectively change the conversation around racism, oppression, power, and change?

Yannick Giovanni Marshall, referring to the George Floyd rebellion, cites what Frantz Fanon wrote regarding the duty of the “middle class, colonized intellectual” to have an ambiguous position regarding violence and to try to calm down the rebellion: “they have the power because they are so close to the institutions of white supremacy themselves.”

Tweet: “We spoke with @furtherblack about the ongoing anti-police rebellion and how abolitionists can push back against liberal co-option, both on the streets and on the terrain of ideas. Podcasting now and on @kpfa and beyond today at 12PM PST. #GeorgeFloyd https://t.co/PN1G1C38XO pic.twitter.com/OTHQfqaWzS — It’s Going Down (@IGD_News) June 12, 2020“

In response, he recommends that we “not allow the liberals to blend in.” It is vital to talk about these rebellions as radical Black uprisings against racial capitalism.

It is not a question of simply talking more about class, and definitely not retreating to the implicitly racist workerism that has characterized many white anti-capitalist movements, past and present. Rather, we need to make it impossible to talk about racism and capitalism as forms of oppression that can be separated. We need to spread the awareness that—through the ongoing process of colonialism—these forms of oppression were created together.

So how do we communicate theory and an awareness of history in a way that spreads throughout society? I do not have the answer (to this or any of the other questions I am posing), but I suspect that we need to fully integrate the answer in our own minds and practices, and to also remember that actions speak louder than words.

Direct democracy is prone to manipulation and obstruction. We have known this since the Occupy! movements and the plaza occupations in 2011, but we have not thought of effective solutions. In part, this is a consequence of left populism. Too many radicals have been seduced by marketing strategies, believing we will be stronger if we can sell the masses on attractive ideas. This only sets us up for failure down the road.

Who doesn’t like democracy? How could it not be a good strategy to tell people that revolution just means more democracy and better democracy?

Classical democracy was a governing system that accompanied a militaristic slave economy. Modern democracy is a bourgeois project integral to capitalism and fully compatible with colonialism. Yes, there are other histories of alternative democracies, but every single one of them is fraught with problems of nationalism and centralization, and every single one of them can be traced back to an initial moment of leftist populism, trying to sell the masses an easy solution, going back to Lenin’s original, cynical claim to “democratic centralism.”

Democracy is central to the white supremacist imagination, so it seems a little strange to insist on pulling down Columbus statues while we still maintain loyalty to that concept.

When we take over space, mass central assemblies will be unable to achieve the revolutionary organization of that space, they will be unable to address deep-seated, multigenerational problems like white supremacy and patriarchy, and they will be especially prone to bureaucrats, manipulators, demagogues, and authoritarians. We already know all of this.

How do we develop effective forms of decision-making in which there is no central ground? How do we create solidarity without unity, coordination without centralization? There have been many experiences with pluralistic organization combining affinity groups with platforms with encuentros, or a dual organization based on overlapping, redundant assemblies, some organized according to a territorial logic and the others according to a functional logic, like neighborhood assemblies and infrastructural/economic assemblies. But these experiences have not been adequately theorized and communalized throughout our movement.

These are some of the questions that need to be addressed. If this conversation expands now, exponentially, we might be able to defeat the counterinsurgency and keep this rebellion growing. If we do not, the conversation is still just as vital, because none of these problems or conflicts are going away any time soon.

“A Critique of Ally Politics” https://www.sproutdistro.com/catalog/zines/anti-oppression/critique-ally…

“Yannick Marshall on Anti-Colonial Rebellion and Pushing Back Against Liberal Co-option” https://itsgoingdown.org/yannick-marshall-revolt-pushing-back-liberals/

“Reparations as a Verb” https://blackautonomynetwork.noblogs.org/post/2019/03/20/reparations-as-…

“Stealing Away in America” https://jewishcurrents.org/stealing-away-in-america/

Immediatism Podcast 78: Can Anarchism Be Saved? by Aragorn!

How to Safely Run a Public Blockade

Bank Smashed in Response to Raid and Evictions in Berlin

A Drink with the Idler: David Graeber

3 Years Since the Death of Santiago Maldonado

Anarchism in the Andes

BLM Should Learn From Anarchists