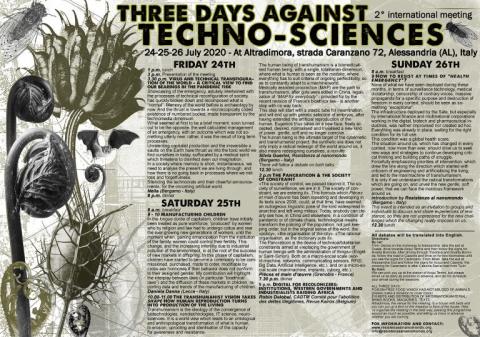 3 p.m. Presentation of the meeting

3.30 p.m. Virus and technical transfiguration of the world

A critical view to find our bearings in the pandemic tide
Showcasing of the emergency, astutely intertwined with the processes of technical reconfiguration of society, has quickly broken down and recomposed what is “normal”. Memory of the world before is archaeology by now. And the thrust is towards a microscopically coded existence of numbered bodies, made transparent by the technomedia dimension.

What seemed at first to be a brief moment, soon turned out to be the opposite: the well calculated management of an emergency, with an outcome which was not something utterly new: rather, it was the result of long term processes.

Unrelenting capitalist production and the irreversible assaults on the Earth have thrust us into the toxic world we find ourselves in today, suffocated by a medical spirit which threatens to disinfect even our imagination. In a society where memory is short, instantaneous, we need to analyse the present we are living through, and how there is no going back in processes where we risk loss and forgetfulness.
Silencing the technocrats and their cheerful announcements, for the oncoming artificial world.

In the longue durée of capitalism, children have initially been treated as pure workforce, “produced” by women who by religion and law had to undergo coitus and rear the ever growing new generations of workers, until the moment when, gaining emancipation from the institution of the family, women could control their fertility. This change, and the increasing infertility due to industrial pollution of the environment, is at the root of the success of new markets in offspring.

In this phase of capitalism, children have started to become a commodity to be commissioned, purchased, made to order, modifiable by cross-sex hormones if their behavior does not conform to their assigned gender.

My contribution will highlight the interplay between laws (in particular “bioethical laws”) and the diffusion of these markets in children, reporting data and trends of the manufacturing of children.

How human reproduction turns into production of the living
Transhumanism is the ideology of the convergence of biotechnologies, nanotechnologies, IT science, neurosciences. It is a world view which leads to an ontological and anthropological transformation of what is human; to erosion, uprooting and sterilisation of the capacity for awareness and resistance. The human being of transhumanism is a biomedicalised human being, with a single, totalitarian dimension, where what is human is seen as the mistake, where everything has to suit criteria of ongoing perfectibility, so as to constantly adapt to a machine/world.

Medically assisted procraction (MAP) are the path to transhumanism, after girls were edited in China, legalization of “MAP for everybody” – provided for by the recent revision of France’s bioethics law – is another step with no way back.

This step will start with a plastic tube for insemination, and will end up with genetic selection of embryos, after having extended the artificial reproduction of the human. Eugenics thus takes on a new face, freely accepted, desired, normalised and trivialised a new kind of power, gentle, soft and no longer coercive.

The human being is the ultimate target of the cybernetic and transhumanist project: the synthetic era does not only imply a radical redesign of the world around us, it also means redesigning ourselves, a non-life.

3 p.m. The Pancraticon & the society of constraint

“The society of control, we passed beyond it. The society of surveillance, we are in it. The society of constraint, we are entering it». This formula which Pièces et main d’œuvre has been repeating and developing in its texts since 2008, could, at that time, have seemed an outrageous linguistic pose of the kind widespread in anarchist and left-wing milieux. Today, anybody can clearly see how, in China and elsewhere, in a condition of pandemic or of climate chaos, technological means transform the policing of the population: not just keeping order, but in the original sense of the word, the “policy», “the organisation of the city». “The rational organisation, as the dictionary puts it».

The Pancraticon is the device of technical/totalitarian constraints aimed at “replacing the government of human beings with the administration of things» (Engels/Saint-Simon). Both on a macro-social scale (world-machine, networks, communicating sensors, RFID, Big Data, Artificial Intelligence, etc.). and on a micro-social scale (man/machine, implants, cyborg, etc.).

The connectivity imperative lies at the heart of the discourse on African development. Though it looks new, the connectivist paradigm is actually part of the old modernizing tradition, based on the linear idea of “delay” and “catching up”. Like the latter, it tends to mask the reality of relationships of power and dominion which structure the field of IT and communications technologies. International institutions, the governments of the North and industrialists are carrying out yet another conquest of Africa, through progressive propaganda on the goodness of the digital for development. The African diasporas in Europe are being pressed to invest in the digital sector in Africa, a sector which largely depends on extraction of the minerals which the soil of Africa is full of.

9 How to resist at times of “health emergency”?

None of what we have seen deployed during these months, in terms of surveillance technology, medical dictatorship, censorship of contrary voices, massive propaganda for a specific purpose and destruction of freedom in every context, should be seen as something “exceptional”.

The infrastructure deployed by the Sate, but especially by international finance and multinational corporations working in the digital, biotech and pharmaceutical industries, was neither improvised nor created ad hoc. Everything was already in place, waiting for the right condition for its full use. This condition was a global health scare.

The situation around us, which has changed in every context, now more than ever, should drive us to seek new ways and strategies to continue developing critical thinking and building paths of struggle.

Forcefully emphasizing priorities of intervention, which drew the line along the direction which started with criticism of engineering and artificialising the living, and led to the man/machine of transhumanism.
It is only if we understand the radical transformations which are going on, and unveil the new gentle, soft power, that we can face the insidious framework around us.

This event is intended as an invitation to groups and individuals to discuss and share experiences of resistance, so they are not unprepared for the new challenges which the changing reality imposes on us.

We can pick you up at the station of Acqui Terme, but please email us as early as possible in advance, and do not schedule your arrival during the sessions.

All debates will be translated into English

Altradimora,http://www.radiodelledonne.org/altradimora/ the venue for the meeting, is a house with beds and you can put up a tent on the meadow in front of the house. Help us organise the meeting in the best way, passing this programme around as much as possible, and letting us know in advance whether you are coming.

Preparing for Electoral Unrest and a Right-Wing Power Grab