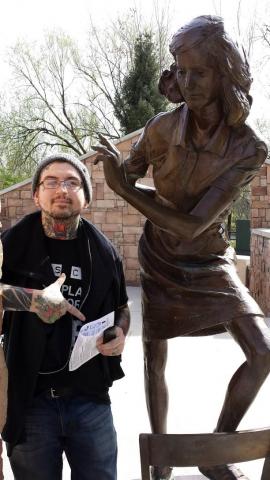 Eric King wrote this regarding the Bureau of Prisons’ COVD-19 response.

“They aren’t doing testing here, they aren’t doing shit really. No hand sanitizer, no mask, no ‘social distancing’, the tiers and showers aren’t being cleaned even semi-daily, we still only get 3 showers a week and only 1 hr outside a day, typically super early in the gloom or rain. Medical staff told me they can’t even order tests! They have to refer it to a doctor, who then refers it to Regional, who then reviews it and decides whether to test or not. Bureaucracy at its finest. They will let us die in the name of justice, blame it on the virus and move right along enslaving, business as usual.

Things here have been boiling a bit and almost went off today. There have been guards going out of their way to make things difficult, lying through their teeth, talking so reckless, small things that build and build. So today during our cell rotations (every 21 days we rotate cells) we just decided to slow burn them and not participate. It’s not much of a stand, but it gave us a chance to say “no” to these pig bastards and blow off a little steam.

We ended up moving cells, they will move you one way or another, but it felt good to air our grievances and make the day cops look like clowns who can’t handle the basic task of cell rotating. Here soon it could have been something much worse, so letting the small aggro out now was a good stress relief.”

The Battle for the 3rd Precinct: a personal account.