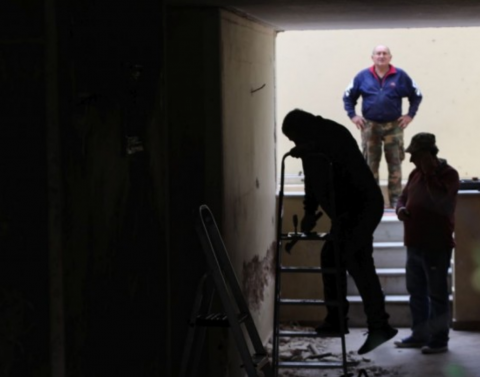 Explosive Attack on Manpower Group in Thessaloniki, Greece in Solidarity with Revolutionaries in US

From Greece to America, deep breath until the death of white supremacy

The assassination of African-American George Floyd by the white-clad white man Derek Chauvin on March 25 in Minneapolis is a war cry. Nothing will be the same from now on. America is burning and the flames of rebellion purify injustice once and for all. Miles away, the revolutionary forces are on the side of the Black Self-Defense. We take responsibility for the attack with a low-powered incendiary device at the headquarters of the American human resources giant ManPower Group at 14 K. Karamanli Avenue in Thessaloniki at noon on June 8, a day before George Floyd’s funeral. Our attack is a message of resistance and revolutionary solidarity to the insurgent forces that are destroying the omnipotence of American supremacy. As long as our Black Brothers and Sisters are the target of white terrorism, no American investment will be safe. 51 years later, the Days of Wrath are here again to haunt the nightmares of the bourgeoisie.

At the same time that we all enjoy our white privileges, black communities are fighting daily against racism and xenophobia. For decades now, people have been losing their lives every day to fire from either assassins or white armed racists because they have a different skin color. The assassination of George Floyd brought to an end, not the illegitimate targeting of the black community, but the social tolerance of this targeting. Nothing will go unanswered.

Hearing the loss of another black person, thousands of angry people flood the streets of American metropolises. They attack the police and police departments with hatred, burning and looting the symbols of capitalism and exploitation. They take down symbols that glorify black oppression and slavery, restoring history. Blacks now have a voice that screams and shouts for immediate social justice and equality.

Opposite them is fortified the white terror of Trump, which relentlessly escalates the conflict. The uprising left hundreds injured by police violence and young people dead. But the killings of blacks do not stop. Robert Fuller and Malcolm Harsch were hanged in California, while Rayshard Brooks was left dead in a Wendy’s parking lot in Atlanta by police fire because he fell asleep. But where injustice is dressed in white, black will cover everything.

In the armed front, solidarity is based on revolutionary action. We recognize the law of all revolutionary violence against the capitalist state of large corporations, its ruling class and its institutions. Talking militarily, alliances between different revolutionary armed formations are primarily a matter of coordinating their direction.

The uprising in the American metropolises is not and should not go down in history as a cry of agony for the rights of our black brothers. Fighting at the core of security and counter-terrorism must lead the global revolutionary community to coordinate forces against the international interests of the US killers. The images from the clashes, a breath away from the White House, with the terrorists buried in the underground shelters, scream in the universe that in the face of popular anger, EVERYTHING IS POSSIBLE.

In the face of a regime that legally kills the black community in the United States, which is deploying military forces to invade Latin American territory (characterized by the arrest of two US secret service agents during their landing in Venezuela), which is shedding blood on Earth in the name of counter-terrorism, the invocation of protest and the institutional struggle for peace and equality is suicide. The Black Defense must follow in the footsteps of its armed ancestors. People’s justice will not come from the convictions and imprisonment of Trump’s uniformed assassins, but from the armed emancipation of oppressed communities targeted by white terrorism and the building of communities of equality in revolt and solidarity.

The arson of the ManPower Group is a practical statement of solidarity with the comrades of the Revolutionary Abolition Movement, calling on the international revolutionary community to take immediate and unequivocal action in solidarity. The war being waged in American metropolises and suburbs will not be silenced. Because the fire of the attacks of internationalist revolutionary solidarity is spreading to the ends of the earth. Comrades, you have our full appreciation and solidarity with the warring factions on the other side of the Atlantic.

All power to the Black Uprising

Appeal from the CIRA library