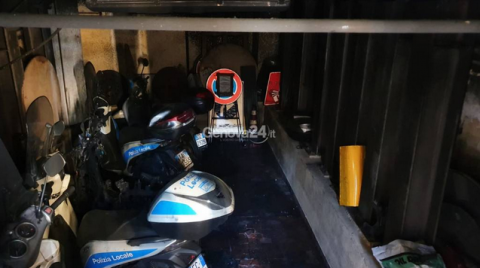 Incendiary Attack Against the Municipal Police in Genoa

The damage of globalisation has also arrived in the West and we have had to deal with it directly. The reaction was certainly not in the perspective of solving the causes, but rather a further rapid step towards progress and an intensification of techno-scientific domination, transformation and rapid adaptation of the logic of authoritarianism and profit.

Even in the port of Genoa, ships loaded with tanks and other armaments continued to transit towards the Arab Emirates.

The State has made clear what its interests are, far from the real needs of individuals, and in continuity with the techno-industrial policy: imposition of harmful technologies such as 5G and mass social control (realized with the militarization of the territories, technological acceleration and the use of various means such as drones, GPS, motorboats, helicopters and various “smart” projects).

All this is imposed with the violence of its armed corps (police, carabinieri, army) and obtained also through repression, social parceling out and isolation of individuals; alarmed by the emergency rhetoric and security obsessions usually used by European colonial countries. The same ones that have accompanied the closure of the borders and the military management of another “effect” of globalization and war, namely migration.

Capitalism and the profit of the masters are the real virus of this society. Government and State defend them through the police, the murderers of all time, ready to repress discontent and rebellion today, as well as tomorrow, in the economic crisis now imminent.

We have chosen to respond with direct action to what is oppressing to broaden the prospects of the conflict and combat the logic of reformist recovery and political mediation of “intervention”. We hope for a growth of the struggles in the continuity of the attack.

Let us show solidarity with the revolts in Italian prisons. We avenge the deaths during the uprisings, murders, abuses, tortures and rapes that the police practice all over the world inside those walls as well as outside.

We welcome the recent riots in Chile and the United States.

We send our solidarity to the anarchists on trial following Operation Scripta Manent, who we want to set free. All our Love goes to them. To their jailers all our Hate.

A fraternal embrace of solidarity to the anarchist comrades arrested in the last anti-anarchist operation “Bialystok” of the ROS of Rome.

Solidarity to the comrades arrested for the operation “Prometheus”, to Peppe, to Juan and to all the anarchist and revolutionary prisoners.