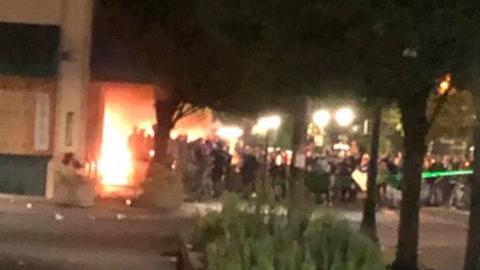 Revolutionaries in Portland looted businesses and set one side of Portland Police Bureau’s North Precinct on fire early Friday morning, as the anti-police uprising that has spread throughout the US continued.

The north side of the North Precinct was set ablaze around 2:15 a.m. Police used CS gas, a type of tear gas, to try to disperse the crowd, but militants threw canisters back at the pigs.

At one point in the early morning, militants and pigs physically clashed as police tried to move them from the area. Some militants shot paintballs at the pigs’ face shields, rendering them unable to see.

Several businesses were looted overnight after windows were smashed and more fires were set. A nearby bank is believed to have been vandalized as well.

Multiple pigs were injured in the uprising.

For the first time since George Floyd was killed exactly one month ago, people in Portland demonstrated at two police precincts simultaneously overnight, and set up barricades outside the precinct in North Portland, which was set on fire.

Militants set up another barricade at the intersection of MLK and NE Killingsworth St., setting a dumpster and debris on fire.

Revolutionaries vandalized the police building by spray-painting graffiti along the outer walls, blacking out security cameras and rolling dumpsters into the street to form a barricade as a line of uniformed pigs looked on from a distance.

Some revolutionaries also attempted to barricade the North Precinct’s exit doors so that anyone inside the building could not get out.

Across the Willamette River at the Justice Center, another group formed on Thursday evening for a vigil for George Floyd and others killed by police. Later, the group dismantled the fence near the building and vandalized the structure.

The revolutionary uprising against police that began after the murder of George Floyd in Minneapolis is not over. The burning of precincts will continue until all pigs are driven off the streets permanently.

Solidarity is fragile – thoughts on the “Network” case from ABC Dresden