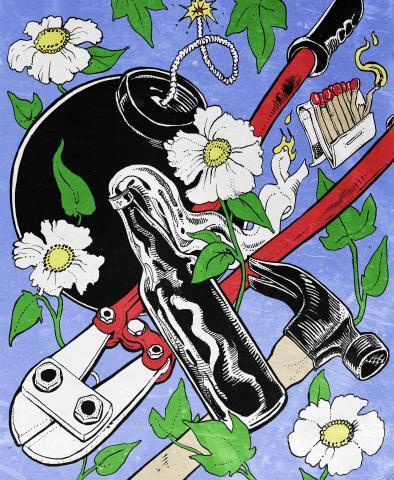 And now in Germany. In the country where it seemed like these events had passed by without a trace. In the last month people in the USA have shown us the way, and now it is here. We have woken up: we don’t have to put up with police arbitrariness endlessly. The USA is culturally still a main reference country for young people and when we see how constant dripping wears away the stone there, it is only natural that it happens here too, where police assaults and racism are a daily reality.

The liberal left can no longer keep up. They cannot understand. Are you serious or do you act only out of opportunism? Do you really fear the fascists becoming angry with you? They say the wildest things here. They would help the far right and give the police the legitimacy for even harder actions. It makes you wonder where the hell these people have been the last few years. They won’t even talk about it. We hear how it is in the USA, but left-wing liberals don’t want to hear that it is similar here, even when it is screamed in their faces. In their world there is a solution for everything, but please people don’t use violence! Their words are the words of people who have never been victims of police violence. Of course, it is no secret that violence will at some point meet with resistance.

Imagine, finally something is happening in Germany. The young people spontaneously start to resist. Then along come the leftists to explain to them what is right and wrong. Fortunately the German left parties have no connection or influence on the young people anyway. That is a good thing.

Meanwhile, the debate about the ‘police=trash’ article in The Daily Newspaper continues and the right talk as if a newspaper was an influence among among migrant youth. What they cannot understand is it’s been a long time since newspaper articles were needed to turn people against the police. The police do this all by themselves with their violent excesses, their racism, and their terrorism. You don’t have to read The Daily for that.

We have been pressed to the ground and treated people like dirt. We are not taking any more shit from them. We set an example that will hopefully set a precedent.

We look forward to next weekend.

Anarchists in Indonesia Call for Solidarity Actions with Fighters in Pakel