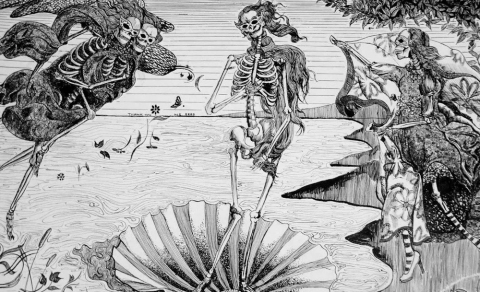 by Sever, via electronic mail

to all those who left after their comrades treated them horribly

When the survivors realize that all the mayhem and tumult was a revolution—our revolution—and that it’s already slipped away from us, a mocking failure belying our pretensions to anything other than misery, other than failure, the blame will start.

The projectuals will blame the go-alongs, the right ideologues will blame the wrong ideologues and vice versa, the nihilists will blame the masses and the followerless will blame the nihilists. Few of them will realize that they were never relevant enough to have earned something as weighty as fault. And none of them will identify the Horrible Creatures who moved among us, some in every camp, mocking our clumsy labels and failed attempts to discern. They are the ones who won the revolution, rotting us from the inside, because they were never fighting for anything different, they were only ever fighting for the right to blame, jockeying for strategic position within this misery-as-usual to tear down any attempt to rise against it.

No ideology is safe from the Horrible Creatures. They are the anti-capitalists who sit on trust funds, the anarchists who rule their little scenes like the lords of a manor, the antifascists who tolerate misogyny, the feminists who abuse those with the wrong definition of patriarchy, communists who shell out thousands on degrees and single-bedroom apartments while friends lose housing and suffer in silence, atheists who excommunicate, harm reduction activists who ghost friends who said something uncomfortable, Tiqqunists able to justify any abuse or betrayal if committed by a “friend” or Party member, anti-colonial activists who weaponize guilt like Jesuit missionaries, queers and trans people who police the new categories, who build gates and hand out keys and declare battering rams and flights to zones of indistinction to be the height of privilege and patriarchy, as though patriarchy were ever anything but gates and keys.

All of those groups began with good ideas, they arose to fight a good fight, but the Horrible Creatures have learned how to move among them, to use the language and the codes, and always get what they want, no matter the cost.

The Horrible Creatures expel, isolate, and dehumanize while they speak of care, they create authority while demanding defiance, they cover up rapes, snitching, lies, and backstabbing while speaking of making the struggle stronger. They abandon and speak of solidarity. And we are the worst of sheep. We follow along if they belong to the same category as us. We are the flock that gives them shelter.

Words are no defense. We are defenseless against the Horrible Creatures.

Today I have decided to name them. But the name is meaningless. Horrible Creatures can name themselves Hunters of Horrible Creatures, and they would track down, denigrate, and destroy any who were identified, together with others mislabeled so after having a bad day. And we would follow them.

Theory will not expose the Horrible Creatures. This does not make it meaningless: intellectual laziness will only win us more depressing defeats. Theory is most important as history, a lucid remembering of all our experiences and failures, an understanding of how we came to inhabit the Misery (even if we have no memory of what came before); and it is important as a horizon, a joyful imaginary we walk towards and a way of walking towards it, ever reflecting on our present. Because Machine Theory had us remove the bodies, the feelings, from our history, all we have are economic statistics, strategy papers, to explain past defeats. We don’t know if the Horrible Creatures were always with us, goading us astray.

By their actions we will recognize them, if we teach ourselves how.

The beastly children of the Facebook generation have brought new weapons and a new fervor to this game of annihilation among friends. They have grown up believing that anything they do not like has no right to existence. In 1945, humanity blinked and reeled a while as it gazed on Auschwitz and Hiroshima, gazed on its new powers of annihilation. Those who felt anything knew beyond any doubt what was most important: Never Again. But over time, we cohabited with those powers, became used to them.

Those powers are bulky and inefficient by today’s standards. Today, people condemn enemies to non-existence and annihilate worlds with the swipe of a screen. They do not blink afterwards. They are already moving on to the next thing.

People have always been horrible, long before Instagram. But it used to take more effort. Before, as people exhorted themselves to cruelty, awash in the near glow of their horror, stained in it, sometimes they accidentally became decent. Today, we can make Hiroshima disappear, and then we can make the smouldering crater disappear as well, and then all those who ask, where has the city gone?, who dare speak the name Hiroshima.

Revolutionaries dedicate their hatred to the institutions of oppression, their unswerving antagonism to those who gain power making those institutions function, and their anger to those who meekly look the other way, who make excuses while cashing their checks. Simultaneously, and in full knowledge of the contradiction, they dedicate their love to all those trapped in the web of society those institutions produce. Horrible Creatures, on the contrary, relish in the easy kill. Attacking an institution holds no interest for them, because you cannot watch an institution squirm and suffer as you turn the knife. Horrible Creatures prefer an analysis of privileges over an analysis of attack, because everyone has some kind of privilege or other (and those with hardly any are more easily silenced); no matter what they choose to do they cannot avoid the label, and if they do not bow their head when it is affixed to them it will smear them indelibly. Privilege makes a perfect weapon, both having it and naming it.

They relish power, which is why they almost never speak about what people choose to do with their privileges, whether they climb the ladder or try to destroy it with others.

As Horrible Creatures are distributed across all ideologies, there are also Horrible Creatures who attack the discourse of privilege and identity. They make common cause with those who critique this discourse for flattening reality and fortifying the essentialism at the heart of oppression, but the Horrible Creatures do so to generate confusion, to cover up their own abuses, to make their privileges unquestionable, to reset the scene to a time when certain forms of oppression were barely spoken of. They will look the other way when someone is abused, and if the harm is named they will make a quick calculation, putting their friends on the scales and casting aside the one with less value. Usually this means supporting the one with more power. They will call for sympathy for the one who abused, as though there can be healing without scarring and growth.

Because of the qualitative nature of revolution, the problem of the Horrible Creatures is central. They rot movements from the inside, but we cannot—in the language of biology and hygiene—treat them as a rot and purge them. As despicable as they are, we cannot be horrible to the Horrible Creatures, lest we become them. No matter how justified we are in casting these abusers and manipulators out. Because it is the justification of harm that is at the root of the horror.

This does not mean that sometimes it isn’t necessary or unavoidable to harm one in order to help another. This is the dilemma the pacifists never surpass. We do not live in a peaceful universe, all of us will harm and be harmed at some point, and the only thing all living beings deserve is death. Anything else is Christianity, and fear of death is the ultimate immaturity, an escapism that generates far more harm.

We will harm and be harmed, and the point is to feel complicated about this, to learn and to grow, to never convince ourselves that something was automatically right or wrong. It is not the harm, but the justification that is evil; it is perhaps the only evil in the world, no matter how astute its rationale. The justification means we don’t have to feel anything. Whether harmed or harmer, we become good, the other becomes evil and therefore deserving of punishment, and nothing more need be said or considered. Harm that is not felt and refelt, interrogated, cherished, despised, cried over, and allowed to go on its way is somatized. It becomes part of the body and in time a part of the social body as well.

We will at times need to harm the Horrible Creatures. But we mustn’t feel justified in doing so. I’m sure they are some sort of alien being, unfeeling and bent on conquest. How else could they be so cruel? But maybe I’m wrong. Maybe if we hold out a hand—the same hand with which we also make a fist when we must—maybe if we fight for a different way of relating that takes precedence over all labels and status, maybe some of these creatures will prove not to be so horrible after all. Maybe some of them were just excretions of patriarchy and the State, walking piles of excrement, yes, but piles that covered what once were and will again be people, no less imperfect than ourselves.

Subjects and networks change simultaneously, though, beings and environments, which is why this possible transformation is a question for the revolution, the revolution that begins today, that began yesterday, that we’re already losing, that we might yet win.

We are open to the moral dimensions of this definition, but no one can call us moralistic: it is not God or Science that has given us this compass, but our own feelings of what is good and healthy. We recognize others have feelings as well, and that feelings are often contradictory. Contradiction is not the end of the world, and those who follow their feelings can learn to recognize one another.

It was only the slavers, rapists, and owners who ever needed to justify their hurtful relations with God or Science. Feeling people, some called anti-capitalists, have lived too long under their tutelage, learned something is only legitimate if it is attached to a “higher reason,” meaning something outside of us. We have wasted centuries looking everywhere but the one place where the answer was hidden. We had it here, with us, all along.

Written at the end of a hot 2019. Not published until now because life.

UCL Saint-Denis – What we want