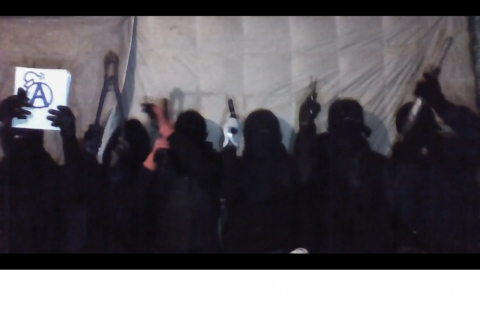 Chile: Call to protest on July 2-3

To the exploited of the territory usurped by the State of Chile and the world:

We address you to make a call in the face of the passivity generated by the misery of Covid-19. We are not an organization that looks to be a flagship of the liberation of the exploited, but, we make a call to organize in an autonomous way in the various territories be it in the form of assemblies, communal pots [potluck/potlatch] and attack or self-defense groups. We are part of the Anarchist proposal, where both social and anti-social groups co-exist.

Hunger has always existed. It has always been present in the lives of the exploited, but now it has become more evident due to the coronavirus and the policies that have precarized the popular sectors and those most stigmatized by society that we are also a part of like the great majority of the population of this country. Those that govern, the authorities and the entrepreneurs of this country, responding to their neoliberal logic, implemented a package of policies as a palliative to the contagion of coronavirus, which instead of helping, they worsened the situation for the most vulnerable people in this territory. But now they established quarantines that only the most privileged sector of this country can maintain without the need to go out to look for bread [to go get food, or earn a living as in “bread-winner”].

Multinationals have not been exempt from this capitalist logic, they inflated the prices of hygiene and food products, making access to the basic needs of the population more difficult.
Those sectors in the periphery have been time and again the ones that have had to pay the cost of this crisis, with generalized death and famine. Layoffs, freezing and lowering of wages, invisibilization of informal labor, and for those who have had to go out and work, no real measures of protection and social security. But that’s not enough for them. Those who dare not comply to the quarantines, are highly stigmatized, criminalized and penalized with prison sentences or very steep fines, while the high sectors of this society, are only spoken to with nice words.

They have wanted to give us inefficient crumbs, like boxes of food and [salary] bonus, that on top of that, have been wrongly distributed. The disinformation media have had a banquet with these measures, making a media spectacle of the miserable help that the State has supplied, since like vile carrion they’re on the lookout to make a spectacle with this whole lamentable situation, laughing at all of us. The mass communication media have always been accomplices of all the artifices and plots of those who govern the territory, and until now, there has been no exception.

The police and the military have not stayed behind in all this situation, once again, they’ve actively participated being the armed arm of the state. They’ve tried to take control of the social order, supervising the streets and ensuring the compliance with the curfew starting on the 22nd hour, that was implemented 3 months ago with the justification that it was to lower the rate of contagion. A measure that has been a total failure, since the rate has increased violently. They’ve intimidated the population inside their homes, they’ve attacked the people that live in the street and they’ve abused their power as always.

Meanwhile, we can’t forget all of those who were imprisoned during the revolt of October 18, 2019, that due to all the repressive measures they’re being sentenced or are being detained without the benefit of returning to their hones while they await their sentences. Where the State has turned a deaf ear to the overcrowding of the prisons. In this sense, all of the resistances that have occurred during a long time period inside this territory have been imprisoned and repressed, with clear examples such as the mapuches and subversives of all political currents that have decided to attack the bourgeois order and the State apparatus.

As if that wasn’t enough, they’ve taken advantage of all this miserable situation to pass laws that aim to consolidate power and obtain economic benefit for themselves at the cost of accentuating misery, not just in the cities, but in the rural zones, leaving thousands of without water, destroying entire ecosystems and perpetuating domination of all life. In the metropolitan region for example, while the people were quarantined, projects like Alto Maipo and Minería Los Bronces [mining] keep operating at a 100%, and have worsened even more the current deficit of the water along the Maipo river and the Mapocho river.

Places like el manzano, el toyo and San José de Maipo suffer the drought cause by these projects. Los Bronces threatens with further harming the scant diversity of species that resist in the foothills of the mountain range, apart from leaving the population of Santiago with a water shortage. In regions like for example the quinta region, there’s still no solution for the shortage of water due to the hoarding of it by the avocado production business, leaving families, small farmers, and ecosystems without water, and the government instead of taking up the matter to help, have applied a repressive policy against the people that have gone out to protest this situation. In many other places projects are being approved behind closed doors without consulting the people that live in those zones and without taking environmental studies into account, for the sole benefit of the big landowners, entrepreneurs and politicians looking to enrich themselves.

We know that July 2 and 3 is relevant in the memory of the fight against the dictatorship, due to the call to protest in the year 1986 by different armed groups, knowing that there is a historical memory of War and resistance that they want to silence. Comrades that possess the military knowledge of manufacturing and using weapons, these are the moments where they can give back the knowledge to the exploited to attack the minions of Power and its institutions.

We make a call for all the territory to rise in subversive initiatives to confront this passivity imposed by State-enterprise $hile, where the political and social violence has to be a liberating element to break with the monopoly of police and military violence that hold up the chilean State.

Here the small politicized groups matter as well as the population in general, we’re all exploited and our war is against the bourgeoisie and their accomplices. We demand the end of the curfew, the liberation of the political prisoners, the ceasing of the repressive laws, the freezing of the payment of basic services, the end of repression to neighborhood organizations like the communal pots and the harassment by the police of the people who organize themselves. We’re part of the post-dictatorship resistance, nothing has changed, everything continues the same for the exploited.

Fraternal greetings to all who fight against domination, we’ll see you on July 2 and 3 in the barricades, anti-social social war against the state and capital.

A Message to Anarchists in Belarus