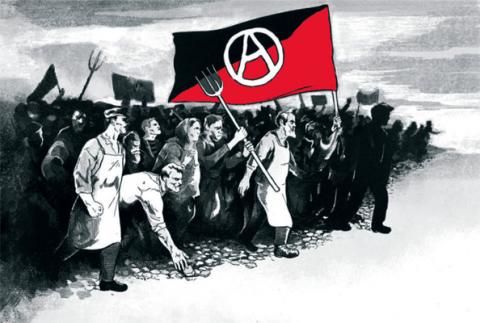 From Anarchist Fighter via Anarchists Worldwide

A Message to Anarchists in Belarus from the ‘Anarchist Fighter’ Website

For all anarchists in Belarus

Friends! A political crisis is about to happen in Belarus. There’s a good chance Lukashenko’s regime, which seemed to last forever, will lose control: partially or totally, temporarily or permanently… Belarusian society shows unprecedented active fury against the dictatorship. What is going to happen when the first cracks in the System will turn into its complete collapse?

Talent, selflessness, courage of thought – are the main advantages of the anarchist movement. Anarchists from Belarus have always been “a particular breed”. In Russia and Ukraine it has often been said that Belarusian comrades are distinguished by their more mature approach to the struggle – they are ready to make sacrifices, ready for repressions.

Being anarchist in Belarus has never been about fun and games. Participation in the movement was, of itself, enough to land you in prison. Decades of persecution have shaped a collective character of Belarusian comrades. It does not seem coincidental that anarchists in Belarus are more noticeable on the overall political background than their colleagues from neighbouring countries.

However, the idea that anarchists can “only support spontaneous people’s uprisings” still remains in our circles. And also that libertarian ideas are miles away from winning people’s minds. That in any current revolution we can only “educate the public”, gain preferences and opportunities for our movement – but not defeat the State itself… These are fundamental misconceptions, comrades.

It’s time to realize that we, as friends of freedom, should use all our energy, our power and resources to convince the most active part of society, that they CAN establish a genuine system of people’s self-government and equality. As revolutionaries we have to join the fight in the most active way. We have to seek all opportunities for gaining social and physical space for putting anarchist ideas into practice.

It’s time for mobilization. If people start a direct confrontation with the authorities, we have to be in the forefront and lead by example. Most importantly, we have to create our own “centers of power” to influence the protests. Decision-making centers should become an alternative to all “headquarters” of so-called oppositionists. It is our responsibility to be brave enough to become thought and organizational leaders for rebelled people. It’s the only way to give free society a chance.

Ukrainian Maidan has given us an invaluable lesson: those, who think that “singing backup” is enough – are invariably left on the side of the road by the revolution itself. They are doomed to be defeated by those who seek central roles. We shouldn’t yet again let power-hungry politicians take those roles. We are advocates of society without competition. But, ironically, to build it we have to compete with our opponents and win.

It’s not enough to “increase activity”. To win we should build an infrastructure for our leader among the whole protest movement. We have to create our own channels of information and propaganda. Make it possible to involve “ordinary” protesters in anarchist activities through chains of our reliable comrades. We have to be ready for some violent confrontation as well. Never fear to take control and make ambitious decisions.

And even if this mustached cockroach remains on his throne once again, if anarchists realize that they have to be at the forefront of political change, it will allow the movement to get ready for the imminent collapse of the current regime. That’s the revolution of mind that we can make today.

Get your sleigh ready in the summer – the winter is coming, let’s get ready.