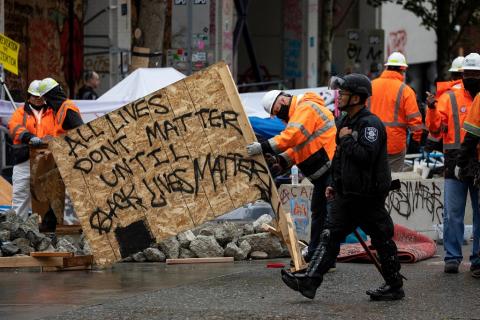 by Ezra Marcus, via The New York Times

At first they called it the Capitol Hill Autonomous Zone.

Their demands, according to Dae Shik Kim Jr., 28, an organizer who lives in the neighborhood, are: Defund the Seattle Police Department by 50 percent, fund more social services in the city, and drop charges against all protesters.

“We firmly believe that the type of leverage that we have during this moment would not be made possible if it wasn’t for the on-the-ground protesters who are there every night, putting that type of visible, strategic pressure on the city,” Mr. Kim said.

Jenny Durkan, the mayor of Seattle, initially praised the zone as “predominantly peaceful,” even while the idea of the area became a culture war punching bag for pundits and politicians.

On June 20, a 19-year-old there was shot and died; many began leaving the zone. Ms. Durkan issued an executive order on Tuesday calling for the area to be vacated, noting “reported life safety, public health and property issues.” Businesses in the area have filed class-action lawsuits against the mayor. All told, four people have been shot: On June 29, a 16-year-old was shot and killed in the zone.

Since renamed the Capitol Hill Occupied Protest, or CHOP, its holdouts spent a week preparing a last stand. “We fought to take this place, we will fight to the end,” an activist told a crowd on Saturday.

On the morning of July 1, police swarmed into CHOP, removed barricades, arrested more than 30 people and loaded tents and debris into garbage trucks, citing “ongoing violence and public safety issues” in the area.

“From our perspective, elected officials seem to only care about violence that affects Black people when it’s politically prudent for them,” Mr. Kim said.

The emergence of CHOP comes amid new attempts at autonomous zones, including in Richmond, Va.; Philadelphia; and New York City. But activists have been transforming neighborhoods into short-lived protest camps for at least a century, opening brief portals into alternate sociopolitical realities. Some have had happier endings.

“One simply wants to live differently within the parameters of what’s possible,” said Kristin Ross, a professor of comparative literature at New York University who wrote a book about the 1871 Paris Commune. “It’s about a strategy where you develop the institutions on your own,” she said, the goal being to “develop the collective capacity to take care of yourself.”

The Paris Commune occurred in March of 1871 when left-wing Parisians expelled the French Army from the city and began a brief experiment in socialist rule. Their methods remain familiar: The Parisians famously toppled a statue of Napoleon in the Place Vendôme.

“The people of Paris just kind of took over the mechanisms of the city and thought, ‘We can run this better in our own interests,’” a CHOP organizer told Roar Magazine. “I see this as part of that tradition and a part of that lineage.”

That state response also has echoes today. “There will never be an ‘Autonomous Zone’ in Washington D.C., as long as I’m your president,” President Trump tweeted on June 23, after activists tried to set up the so-called Black House Autonomous Zone near the White House. “If they try, they will be met with serious force!”

The term’s meaning is slippery. “Definitions are always contentious,” said Timothy Miller, a professor of religious studies at the University of Kansas and author of “Communes in America, 1975-2000.” “Autonomous zones are really temporary, for the most part, and tend to be protest camps.”

Today there are hundreds of intentional communities in America listed on just one database, including farming-focused eco-villages and a “dancing sanctuary” for people with PTSD.

Yet even these boundaries are porous. “There are in-between cases that have features of intentional communities and temporary autonomous zones,” Mr. Miller said. He pointed to Occupy Wall Street’s 2011 encampment in Manhattan as one such example.

The term “temporary autonomous zone” was popularized in 1991 by an anarchist theorist named Peter Lamborn Wilson, better known as Hakim Bey, who published a manifesto that cited a (possibly imaginary) 18th-century network of outlaw “pirate utopias” and the “anarchist liberated zones” from the cyberpunk author Bruce Sterling.

Mr. Bey theorized that the internet would help bring about impermanent “free enclaves” where culture could spread outside of state control. (Mr. Bey’s conception of anarchy estranged him from some others; he has published work in the journal of the NAMBLA, a group whose advocacy includes that sex between men and boys should be legal.)

His theories prefigure the temporary enclaves that have bubbled up this month, even as they’re snuffed out within weeks, days — or even hours.

“Those are the best autonomous zones,” said mIEKAL aND, 62, who founded a small rural Wisconsin anarchist community called Dreamtime Village with Lyx Ish in 1991. (Many self-identified anarchists change their names.) “It doesn’t have to keep fighting to do its thing, because it’s already over. There’s a beginning, a middle and an end.”

Dreamtime Village, which has sometimes billed itself as a Permanent Autonomous Zone, became a destination for nomads traveling America’s back roads, he said. And, nearly three decades later, the community is still going strong. Asked what lessons activists elsewhere may learn from its longevity, he emphasized the value of consensus.

Often, he said, the community draws people in their early 20s who are especially “issue driven,” whether they’re militant vegans or animal rights activists. In order to prevent any individual from derailing important meetings, Dreamtime’s self-governance requires “consensus-minus-one, meaning that a single person can’t block a decision-making process.”

The Long Back and Forth of History

Early in the morning of Jan. 5, 1969, a young Irish Republican named Liam Hillen painted the words “You Are Now Entering Free Derry” on the gable of an abandoned house in the Bogside neighborhood of Derry, his native city.

Mr. Hillen spent the night at a protest (which was inspired by the American civil rights movement) and grew angry after watching police and loyalists beat Republicans with batons and rocks. Painting the sign was an act of resistance. “What we were actually doing was just declaring: ‘You are now entering Free Derry, pal, and this is us, and you are not in control,’” Mr. Hillen said in 2009.

That summer, locals erected barricades and pushed police and loyalists out of their neighborhood, in a clash known as the Battle of the Bogside.

Residents of Free Derry organized their own security patrols and public transit. The barricades went up and down over the next few years. After a prolonged period, “the British army were nipping at the edges of Free Derry and coming into it en masse in heavily armed patrols and armored vehicles,” said Adrian Kerr, the manager of the Museum of Free Derry. “This was two sides at war.”

In early 1972, British forces killed 14 unarmed civilians. The Bloody Sunday massacre transformed Free Derry into a global symbol of resistance. In 2010, the British government released the results of its inquiry into the killings and people in Gaza flew the Irish flag, Mr. Kerr recalled.

And, this month in Seattle, someone set up a wooden sign in tribute to Derry, near the barricades: “You Are Now Entering Free Cap Hill.”

“One of the criticisms that could be laid against the hard left is that they talk a good revolution — they never do it,” Mr. Kerr said. “Autonomous zones are where people have actually got up and done something. It might not succeed. They might not last a long time. But it’s not talking, it’s action.”

“My advice for activists in Seattle is to know that we stand with you,” Maeve McLaughlin, a Derry resident and former Sinn Fein assembly member, wrote in an email. “Know that the eyes of the world is on you. Know that one of the key catalysts for the long campaign for justice for the murders on Bloody Sunday was that the world’s media flashed images across the world of the denial of rights, of police brutality and ultimately of murder.”

The Exhausting Practice of Consensus

Perhaps the largest experiment in autonomy today is taking place in a sliver of land in northeastern Syria, where a collection of Kurdish-led militias have fought off ISIS, Turkey and Bashar al-Assad, the president of Syria.

The autonomous region of Rojava follows the teachings of a revolutionary socialist named Abdullah Ocalan. It is “often described as a paradigm based on three pillars: radical democracy, ecology and women’s liberation,” said Dilar Dirik, a Kurdish activist and researcher at the University of Oxford who has spent time in Rojava.

Rojava was born when a Kurdish militia captured a swath of territory during the Syrian Civil War. “It’s about not being like a state, because the state is seen by many autonomy struggles as actually a system of domination that controls people, rather than provides for them,” Ms. Dirik said.

Decision making in Rojava is also an exercise in consensus building. “Raising one’s hands to vote is less important than reaching an understanding,” wrote Zelal Jeger, the co-chair of TEV-DEM, a political organization in Rojava, in response to questions sent through a representative. “If we put something to a vote, and you receive more votes, and you win and I lose, fair enough — we do it like this. But before we vote, we discuss for hours, until you and I reach a consensus. Then there won’t be incorrect decisions.”

Rojava has also discussed the future of policing. Communes have localized groups of rotating armed volunteers known as Civil Defense Forces. “The logic is that it shouldn’t be people from outside,” Ms. Dirik said. Policing “shouldn’t be, like, ‘Random people who don’t know you just come and beat you up when you make a mistake.’ When people know each other, they also understand what’s going on in that community.”

Robin Makhno, an American anarchist who now lives in Rojava and does not use gendered pronouns, said in an email: “The experiment with democratic confederalism as a post-state way of organizing seemed much more promising than almost anything else being attempted,” In Rojava, they added, it’s possible for outsiders “to really connect with the revolution in genuine ways, to affect and be affected by the struggle to change the society, and not just get a photo op or some kind of war tourism.”

Mx. Makhno called CHOP a “beautiful and exciting development in an otherwise incredibly bleak time for the United States,” and offers encouragement to protesters in autonomous zones.

“The best self-defense is strong community relationships,” they wrote. “Don’t lose sight of the long-term goals, celebrate every victory and love your comrades. You may have to do things less heroic and more difficult than you imagine.”