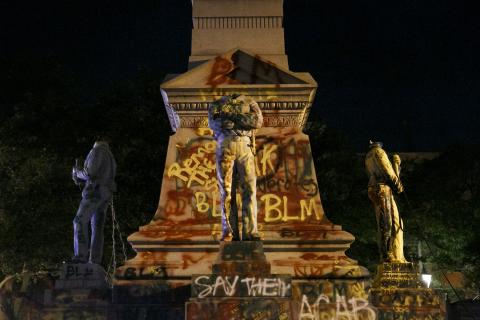 by Nezumi, via HAPAX blog, translation is ours

“That “revelation” is, in other words, that life is something absolutely unjustifiable, and this thing confirms all the more that it need not be justified…” (“Louis Wolfson, or, the procedure”). It’s only through this revelation that people can set about becoming minority. Majority means justified life, or that deceptive whole that’s called justified life. The political outcome of the epidemic has been the “instruction” of even the majority on the impossibility of life’s justification. This is nothing other than the heart of “Monologue of the Virus,” and at the same time what Artaud made clear with his plague theory in The Theater and Its Double. Black Lives Matter is the result of this “instruction.” This first appeared as the excessive self-defense of the majority, then revealed a confluence with the class of white people who’d been indifferent to BLM up to that point. There’s no overemphasizing the epoch-making nature of monuments connected with slavery being destroyed and tossed out as a result of this confluence. “Civilization” itself is being destroyed along with these monuments. This is because “civilization” is the apparatus by which the majority continues to be reproduced. Here begins a new revolution. While asking what “revolution” means with unjustifiable lives and in a world becoming extinct (look at the locusts causing peasants to starve).

The Uprising in Colombia: “An Example of What Is to Come”