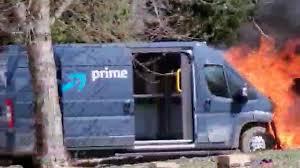 From The Transmetropolitan Review

Now that we’re in the midst of a new uprising, the editors found it appropriate to remind our readers that Amazon is still as powerful as ever in the US, even more so because of the COVID-19 lock-down. With thousands of businesses shuttered under government orders, Amazon has filled this supply gap and gobbled up even more consumers into its Prime empire. As you might expect, Jeff Bezos has done everything in his power to not only keep his Amazon fulfillment centers open during the quarantine, but to endanger the lives of everyone who works there. Despite his pledges of new safety measures, Bezos continues to repress any organized resistance in his warehouses or Whole Food grocery stores, fueling a backlash that we will now attempt to describe.

On February 16, 2020, less than a month before the US quarantine, a group of anarchists vandalized a Whole Foods in Los Angeles and disabled the Amazon Locker where consumers retrieve their new commodities. In their communique for the action, the group wrote that “Amazon has collaborated with La Migra aka ICE by snitching on undocumented workers who have gone on strike. They have supported the surveillance capitalist infrastructure of the police state with Amazon Web Services.” In addition to all of this, the group spray-painted “1312 multiple times to demonstrate our hatred of the police.” While this action received no coverage from the local media and was easily buried once the US pandemic hit, workers at that Whole Foods went to work with a smile the next morning.

Once the quarantine hit, workers at Whole Foods organized a sick-out at the end of March to demand higher pay, more safety measures, and the shut-down of any Whole Foods store with a case of COVID-19. This work-stoppage took place just as Amazon was waging a fierce anti-union campaign inside its stores and fulfillment centers, a despicable effort that resulted in over 500 cases of COVID-19 being hushed up or ignored completely. The few employees who challenged this horrible situation were fired. This tension grew in the lead up to May 1, a day that saw thousands of Amazon and Whole Foods workers refuse to do their jobs alongside workers from Target, FedEx, Walmart, and Instacart, all demanding higher pay and better safety precautions. In a depraved and cynical gesture, Jeff Bezos increased their hourly pay from 15 to 17 dollars, only to announce this raise would be taken away by June. As you can imagine, people were very upset.

Some time around May 1, a group of anarchists torched an Amazon Prime delivery van in Los Angeles in solidarity with these striking workers. In their write-up for the action, the group explains that they “could not sit idly by and watch the spread of COVID-19 turn ICE detention centers into full blown death camps. Amazon provides the cloud services that hosts the Investigative Case Management system, the database utilized by ICE and other Federal agencies to compile public and private data to track and deport immigrants. Amazon plays a role in every raid; every family separation; and every death at the hands of ICE.” Once again, this action in Los Angeles received no attention outside of social media and the internet, although it certainly pleased the employees at that Amazon facility.

On May 1, around the time of the arson, a Vice President at Amazon Web Services resigned from the company after the firing of “whistleblowers who were making noise about warehouse employees frightened of COVID-19.” In the same blog post, he goes on to write that “at the end of the day, the big problem isn’t the specifics of the COVID-19 response. It’s that Amazon treats the humans in the warehouses as fungible units of pick-and-pack potential. Only that’s not just Amazon, it’s how 21st-century capitalism is done.” He cynically concludes this statement by stating that the Amazon workers are “gonna get treated like crap, because capitalism.” This high profile resignation received massive media attention and represents just a fraction of the internal resistance plaguing Amazon.

On May 26, 2020, a group calling themselves the Lorenzo Orsetti Anarchist Brigade snuck into an Amazon facility somewhere in North Carolina and slashed the tires of eight Prime delivery vehicles. In their communique, the group writes that “it is not only the corona virus that is making our lives unbearable. But even more so, it is our continued daily lives under capitalism and state control. Amazon and other tech companies are exploiting the virus, accumulating unheard-of profits and pushing their nightmare tech world.” This action received no media attention, but it did succeed in brightening the day of the workers at that Amazon facility. It’s doubtful those anarchists of the Lorenzo Orsetti brigade had any idea an uprising would break out in the days after their modest action.

On May 26, the police murdered George Floyd in Minneapolis. Two days later, the city’s Third Precinct was burned to ground, along with luxury apartments and corporate box-stores. This anti-police uprising spread across the US all the way to Los Angeles where a Whole Foods was looted on May 30 amid the burning of police cars and the torching of buildings. This uprising continued onward to Santa Monica where, on May 31, hundreds of people looted the stores of the Third Street Promenade. In the midst of smashing the windows at City Hall, torching a sheriff’s patrol car, stealing dozens of guns from a Big 5, and shooting an LAPD officer at the Venice border, part of this massive crowd broke off to loot an Amazon Prime delivery van of all its goods, an act that will only become increasingly common. According to the Prime drivers, Amazon has instructed them to abandon their vehicles should they ever be surrounded by looters.

Five days after this action in Santa Monica, an Amazon fulfillment center burned to the ground sixty miles away in Redlands. Located within the massive Inland Empire logistical hub, this facility has the distinction of being the first Amazon facility in the US to be completely destroyed by fire. Shortly after this event, Amazon claimed an investigation would determine the cause of the inferno in “the next couple days.” As of May 13, a full week after the fire, there is still no word about the cause, making it highly likely it was arson. Given the history of fires in Amazon facilities, Bezos will no doubt attempt to cover up this latest act of worker sabotage. And so we leave you here, within the charred remains of the Redlands fulfillment center, to ponder the paths of this unfolding uprising. Good luck in all your efforts. The world is yours.

Remolding Hong Kong: A View from the Mainland