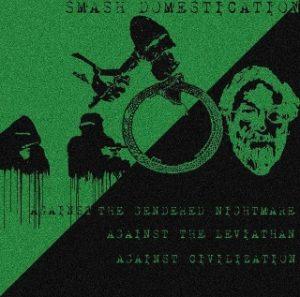 Irish meaning anarchy – absence or denial of any authority or established order.

Anarchy is not a planned system or future society, it is an active revolt by individuals to live the way they want to live here and now in the immediate.

Anarchy is not waiting for the right conditions to materialize or waiting on mass organisation to be built, but to consciously take advantage of the cracks in the system wherever you live whether in a housing estate, countryside, city, or prison to create the space for ourselves for a self-creating life against domestication and all authority, constraints, idols, and controls forced upon ones life, and to actively experiment with projects of liberation and revolt either individually or collectively to undermine this authoritarian, monolithic, industrial civilization.

Ainriail is an online anarchist journal based in Ireland.

Ainriail welcomes submissions such as action reports, prisoner solidarity, analysis, poems, art, etc from individuals or groups in Ireland or elsewhere in the world.

Any material published Ainriail does not necessarily share the views or ideas.

Ainrial has not been involved in any of the direct actions published here. Any action reports published here are either republished from other websites or mailed to us anonymously.