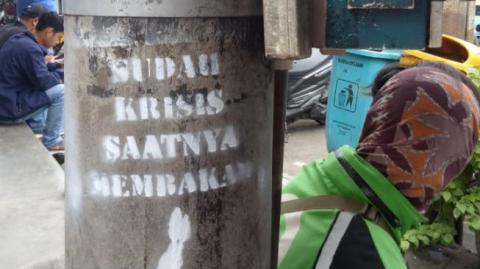 Solidarity with Anarchist Prisoners in Tangerang and Bekasi, Indonesia

On April 9th, 2020, three of our comrades were arrested and convicted of a heavy crime for spraying several graffiti that say “_sudah krisis, saatnya membakar_” (there’s a crisis already, time to burn) and “_melawan atau mati konyol_” (fight or perish). What is actually a voice of rightful citizens is considered a crime of provocation. Their art is a valid criticisms toward the government’s lack of integrity in mitigating the impacts of COVID-19 pandemic and just a petty crime at most.

Not long after, two other anarchists were also arrested by the police in Tangerang and Bekasi, without any solid ground. During the investigation, they were beaten and their faces were wrapped with plastic, which made them unconscious; a series of unauthorized measures to the point of torture. This violence was followed by isolation that made them unaccessible to their friends and families, even to legal attorneys that they’re supposed to get as stated by the law.

Three of them are currently undergoing a court trial. They are charged of violating the Law of the Republic of Indonesia, No. 01, 1946, article 14 and/or article 15, and against the Criminal Code article 160, where the conviction can be up to 10 years of prison time. Meanwhile, the other two, who are still underage, are already convicted with 4 months of prison time.

We are calling out for solidarity and open donation to support our comrades during their time behind bars. This solidarity is open for local donation or anyone overseas that shares the concern.

To Hell or Utopia