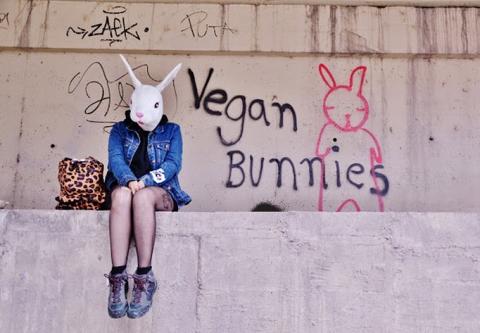 The Peruvian artist Vegan Bunnies uses urban art to ‘deconstruct’ topics of gender, at the same time she tries to deconstruct herself day after day because she doesn’t consider that she is perfect, nor is she looking for perfection, instead she ‘improves constantly’.

Vegan Bunnies talked to the press about her participation in the ‘Urban Art’ exposition in the city of Logroño, that can be visited until the next August 23 and in which this artist painted a mural in one of the walls of the exposition.

Bunnies underlines that expositions such as this, dedicated to women in urban art, give ‘more strength to women, that were almost always present in museums and galleries as the muse, but there are also artists and creators among them’.

‘We’re not only mothers and housewives, there’s still people who still believe in schemes like that of the family formed by one woman and one man, and we have to seize these times to raise our voice’, she affirms.

This graffiti artist remarks ‘woman, in general, has always been invisibilized in everything: this has been seen since the beginning of the feminist struggle, with simple basic rights that they could not exercise and, even then, with all the time that has passed, we see it even in the language’.

The work that is signed by Vegan Bunnies speaks as much of personal daily situations, with the visualization of her depression, as well as situations of her fellow women, through messages that, although not always written out, are present in her drawings.

She tells that she began to make urban art some eight years ago in Barcelona, where she did ‘anarchist paintings’, from then she went on to make posters and one day, while she drew on a piece of paper, she asked herself why not portray her creation on the street, that ‘broke with the aesthetic that the anarchist movement is accustomed to’.

‘Anarchism motivated me, its way of expressing itself in the streets always interested me a lot and, when one has an interest in something, the world takes care of taking you to see those things, it was something natural’, she emphasizes.

The mural that Vegan Bunnies painted for ‘Urban Art’ is based on ‘very recent events’ represented through her recurring characters, a couple of little bunnies, with which she tries to make visible ‘current situations’ that affect society on the daily.

The center of this piece is protagonized by a girl of color that throws a cactus, a reference to Banksy’s graffiti, in which a boy carries out the same gesture with a bouquet of flowers, she specifies.

‘If I had to throw a plant, it would be a cactus, because of the rage that I feel towards all the unjust things that happen’, emphasizes this creator, who adds that her mural references social revolt, discrimination, gender equality, veganism, feminism and the transexual flag.

With respect to how she defines her art, she points out that she makes what ‘springs from her’ and what carries ‘the pure and hard sentiment from the streets’, be it ‘painting a graffiti as vandalism or making the prettiest mural in the whole world’, because ‘you can’t limit what the heart and mind demands’.