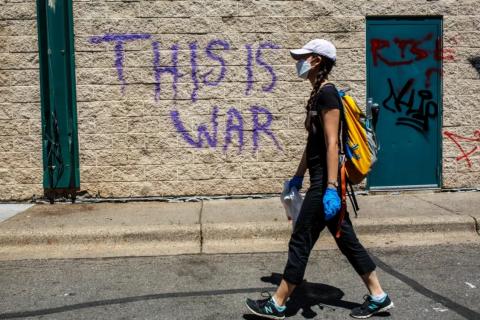 by NEZUMI, via HAPAX blog, translation is ours

2
Many have pointed out that corona is something that’s rapidly amplified the exploitation and discrimination, marginalization and abandonment, as well as the racism that’s existed before it, and at the same time brought about the intensification and policing nature of surveillance society. But what the current insurrection announces as a politics for after corona isn’t limited to that.

3
Ishikawa Yoshimasa, while citing Derrida, argues that (“The stupidity of the human’s inherent animality”) the virus calamity is the exposure of incalculability in the face of globalization which subsumes the world based on calculability. At this time, an unprecedented situation was brought about in which the state as population maintenance apparatus strangled capitalism. Here too was born the strange sight of sovereigns continuing to oscillate in the amplitude between Trump and Merkel, with the right wing emphasizing freedom and the left emphasizing confinement. There was laid bare the frailty of governance, the collapse of those biopolitics.

4
In this rift George Floyd was brutally murdered, and a new insurrection began in resistance to this. Why did racism become the focal point? We’ll cite below something we quoted when we were discussing fascism last year: “According to Foucault, racism from modernity onward was formed alongside biopower. Racism is the means of being able to enter into the gaps in the realm of life taken on by power.” Racism is the condition of biopolitics, but it’s precisely because of this that it’s the original sin that haunts it. This is the paradox of so-called advanced countries and even more so the state itself having colonialism as its foundation. Foucault expanded racism into something that “becomes necessary… the moment you think about looking your enemy in the face.” If that’s the case, isn’t Schmitt’s friend/enemy logic a displacement of racism? As this crisis isn’t realistically unresolvable, the political science of determination in a state of emergency (state of exception) is born once again.

5
Racism was derived from colonialism, but according to a recent work by the widely quoted Scott, the slave system in this form has its origins in the agricultural state itself, and it was in the permanence of agricultural states that epidemics had their beginning. And the virus is something which continues to redefine life between existence and non-existence. That is, it was inevitable that resistance to the governance laid bare by the virus tragedy would be triggered by racism, and by returning to nature this insurrection cuts through the origins of governance. And with this disrupts Schmittian politics by virtue of its asymmetry. It emerges into another dimension by answering the question of racism with “the external force of natural” (Egawa Takao). No longer is attacking racism a defense of the last fortress of liberalism.

In the Autonomous Zones