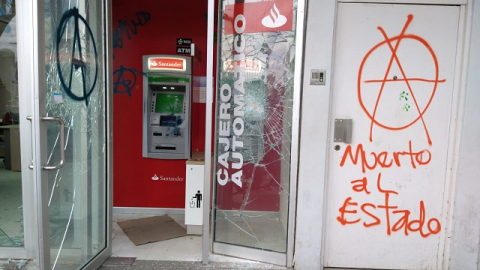 June 14, in front of the Autonomous University of Benito Juarez, in Oaxaca, various anarchist groups protested against the violence of the State, remembering the protests of 2006 where there were various murders by police. The militant protesters avenged the murder of young people in the state of Oaxaca, like Alexander, 16 years old y Diego E.L.P. 20 years old, as well as other activists that were murdered in the region.

Alexander was murdered June 9, when he was going out with the company of three young people to buy a soda in the city of Vicente Camalote, located in the north of Acatlán de Pérez Figueroa. The group was attacked by local police who fired gunshots from a patrol car.

The contingent blocked University Avenue on both sides with incendiary barricades, painted slogans on the walls like “police rapes and murders” and “we are their worst nightmare” as well as anarchist symbols. Convenience stores were attacked and looted, leaving liberated products on the street, as well as some banks, various signange and public property. The press was also violently repelled.

These events are added to the streak of violent protests against police in various locations across the country like Guadalajara, Ciudad de México, Xalapa y San Luis Potosí, where anarchist groups and other protester gathered to give an anarchic and violent response in the streets.

March is Coming: The Next Phase of Revolt in Chile

Toward a New Anarchism: Anarcho-Daoism