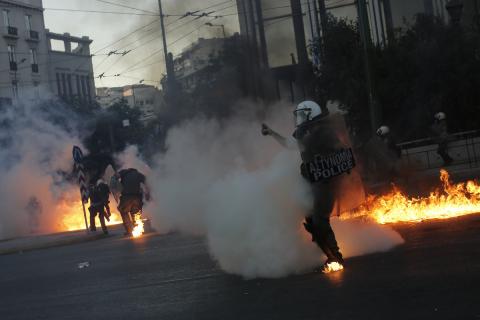 9 July 2020, Athens, Greece: Proposed by a self-proclaimed socialist Minister of Public Order (Michalis Chrisohoidis), taking part in a right wing government (News Democracy), assisted by the votes of the self-proclaimed socialist party (KINAL), the greek Parliament approved a junta-inspired bill on Thursday imposing new restrictions to quash and destroy the right to protest, a right integral to the so-called democracies, eg. under the provisions of the new law you will be arrested for joining a protest that hasn’t been authorized by the police. For dozens of years across the world, this has been called a Police State or a Dictatorship but then again the greek governing party’s name is “New Democracy”, which probably means the same, when someone feels the need to affix the word “New” to the political theory of “Democracy” that has been solidified for more than 2.500 years.

As a result, thousands of people marched through central Athens denouncing the new law, and managed to approach in great numbers the greek parliament at Syntagma Square, during the discussion of the bill. The sight of hundreds of policemen that flooded the area around the parliament, during such a sensitive topic of protest, aggravated things and soon the protest turned in to a riot, making the atmosphere unbearable to breath, while the riot police “bombarded” the area with asphyxiating gas grenades.

After a decade long financial crisis, Greece is expected to suffer a new major recession this year due to the impact of the pandemic. The new law that was passed yesterday seems to aim exactly towards what’s coming. The strong reaction of the greek society, for all the money that were thrown away by the greek government and Athens mayor (Kostas Mpakogiannis) during the quarantine and what followed. It’s no wonder that the greek government chose to hire thousands of new policemen, rather than nurses and doctors during the COVID-19 pandemic. But, then again, as it was aforementioned the governing party’s name is “New Democracy”…

Hamilton Update: News About Arrests and Tips for Staying Safe at the Blockades to Come