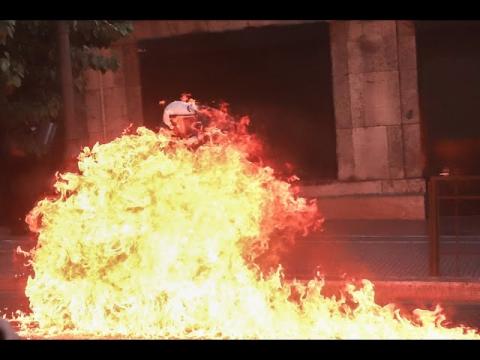 Athens, Greece: July 9, 2020: video from the clashes in the center of Athens during the passing of the junta law tactics designed to break up gatherings from the greek government..

via: act for freedom now!

The fate of democracy has always been sealed. States and the conservative needs of society require, from time to time, shutting the door on even the most basic freedoms. A law is just a signal to the masses that security, has arrived.

We know what is coming. We have experienced direct preparation with new policing tactics designed to break up gatherings. For the young people who will be flooding the streets these years let’s be humble. For them, it is new. And whether the historical memory includes similar or not, it’s best to speak to an audience and not ourselves.

The government has lowered the bar, admitting that they are in such a weak position that any “disruption of commerce” is unnacceptable.

Anarchists too, are in a difficult position. Changing times necessitate abandonment of some strategies. For our own ability to keep fighting and the furtherance of anarchy. 2020 is not the time of strict ideological approach, which is hopefully very obvious.

We are encouraged by neighborhood based activity such as consistent breaking of former occupations.

We know that small planned activities will be repressed greatly. As for the center, the importance of large scale “economic harassment” is declared by the state themselves. Abandonment is not an option. The ball is in our court on how to move forth.

Tuesday and Thursday, a meeting in the streets regarding our future.