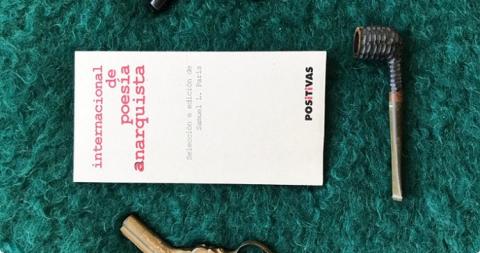 “Anarchist Poetry International” is the first anthology of anarchist poetry by international authors in Galician, published by Positivas and coordinated by the poet Samuel L. París. We spoke with him after the publication of the book.

°I didn’t think it was “important”, but it was necessary, simply because no one thought of it and I didn’t think anyone was going to do it. It may sound like a joke, but if you think “I’d like to see this get made” and it turns out no one does it, you can opt to compliment yourself for thinking of it or to do it. Here we chose the path of doing it. The anthology compiles actions in response to, in negation of, and overcoming the constant servitude present in the literary system and in life.

–How did you reach the authors and what guided your selection?

°The way in which we reached each of the voices present in the anthology was, as the name of the Positivas poetic collection appears to indicate, diverse. With some authors I had the luck of having had direct contract in some trip, like with Kostas, that tricked me in Naxos and accused me of being a fool for eating some overripe figs with oregano, those were really good, but come on… Some other authors I contacted, as you can expect, through the web and, of course, others I found through recommendations by third parties. There were even some cases, like with ∅, that they came along with some of the authors I had already contacted. The anarchist criteria in the selection was the starting point, but then I saw that the project needed to compile texts that were effective in lighting up a fuse and that would be conducive to keeping the wheel of disorder turning.

–The word anthology (from the greek ánthos- flower) is something akin to that, to gathering flowers. How do you approach the responsibility and care involved in selecting and making visible a specific poem and not another? Did the poets participate in this decision?

°The project is approached with the irresponsibility that it deserves and with all the care and affection that one could have (which is not saying much). The poets were always involved in the decision over the final form in Galician, not so much in the selection process. One must be wary of poets. Above all, one must be wary. Be wary!

–One of the poems in the anthology is a tongue-twister written in Russian. What problems or challenges do you face in translating these texts?

°Good Christ, that’s a fact! Crosswords, sonnets, haikus, wordplay… In these texts we found many formulas that were difficult to understand considering the hurdle of code-switching. Each time that I found a solution for their translation, I had to explain the decisions taken to the authors and collectives to get their approval. This is clearly one of the main reasons why this project has expanded during approximately eight years since it’s beginning.

–“Anarchist Poetry International” was finished days before the elections in Galicia. You decided to end the anthology with a controversial poem about nationalism. What is your opinion on the relation between anarchy / independence / nationalism in the current context of our country?

°The text from Paulette Aubert from France, like all her poems in “Killing All Faces”, could not be the solution to all problems, but to some, it can be with an admirable precision. Which might generate some type of controversy once you show what the text exposes. And in my opinion about the relation between anarchism/ independence/ nationalism, I think there is no small rival, what matters is the team, that the tie is at 50%, that what happens in the field stays on the field and that penalties are a lottery.

°With destruction and the bunny necktie.

– I’m very grateful for the interview.

TOTW: Niches and Roles and Eco-systems Oh My