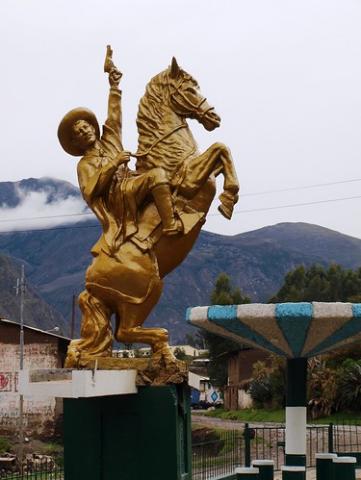 From Diario16 via El Libertario, translation by Anarchist News.

Anarchism has a long history in Latin America, dating back to 1860 when the ideas of Prohudon and Bakunin’s about peaceful and violent struggles came from Europe, in manifestations of individual and collective heroism, in organizational efforts, in oral, written and practice, in literary works, in theatrical, pedagogical, cooperative, community experiments, etc.

This story has never been written in its entirety, although there are some good partial studies. Some historians do not know the facts or consider anarchism as a marginal and absolutely negligible and disdainful ideology. Others, know what anarchism means in the history of socialist ideas and understand their attitude towards Marxism, and that is why they strive to forget or devalue it by characterizing it as the fruit of revolutionary immaturity, abstract utopianism, or the rebellion of the artisans or of the petty bourgeois , etc.

In the following lines on a book shelf, in a village in the Andes, in the home of a large landowner, I remember seeing two covers of those books: [sic]

My first road trip, together with twenty schoolmates, we left our families’ supervision for the first time for a promotional trip from Caraz to Chiquián, on the border between the Ancash-Lima regions. Decade of the 50s.

After the brief welcome greeting, a line of children like us formed in front of each of the visitors. Pedro Jaramillo, held out his hand, took my suitcase and said “we’re taking you home with us” Suddenly I became a family member. They opened a bedroom and invited me to rest.

Alone, in silence, with the full moon visible from the window, I stopped to look at the photograph of a man on horseback, wearing a straw hat. I did not wait long and left the bedroom to go to the living room, where the family talked enthusiastically about the harvest of the hacienda. And in the background, again, in a prominent place, there was same photograph. In this way I began to know more about who Luis Pardo (1879-1909) was.

In the central square of Chiquian, the residents have up until now added stories of their popular heroes who are part of the city, and of the Pampa de Lampas, where the bust of Luis Pardo Novoa remains: “Illustrious Son and Benefactor of the Poor”, statue that was chiseled by the Peruvian sculptor Vidal León. And the main street of the city is also named after Luis Pardo.

In 1929 the film Luis Pardo was filmed, with the direction of Enrique Cornejo Villanueva, who cemented the consecration of Luis Pardo as: social fighter and romantic figure.

“The song of Luis Pardo” or “La andarita”. At his death the weekly publication Integridad appeared, that was directed by Abelardo Gamarra “El Tunante”, in which a poem of eleven décimas by an anonymous author was published titled: “The song of Luis Pardo”, whose music in waltz rhythm is attributed to Justo Arredondo.

The poem talks about the death of his parents and that of his beloved Andarita, as well as narrating his laments and the “why” for his rebelliousness against the authorities. The most well-known and emblematic version of this waltz was that of a Peruvian ensemble: Los Troveros Criollos, 1956.

Students from the Colegio San Ignacio de Loyola de Piura, on the border with Ecuador, on a portal about Luis Pardo raise three questions: Is banditry a popular feat? Why does popular art glorify its bandit heroes? What is behind the mythical popular conception of its bandit heroes?

These questions are answered extensively. In the Library of Congress
in Washington-Unesco Digital Library, there is infinite information about anarchism and different expressions that question the traditional order. Juan Pablo Damondo has called it the Narrative of the Bandit, to refer to the heterogeneity of discourses of identification with the “noble thief who took from the rich to deliver the poor.”

Because of this, Luis Pardo in Enrique Cornejo Villanueva’s film, in the words of the critic Bedoya, motivated the composition of huaynos, waltzes about this character whose popular identification makes him a thief who steals the rich, in individual protest against the daily drama which is observed each instant not only in the rural world but also in the city that expels the weak towards the hills and sandy areas, a brushstroke of what it is to think or want well-being for all, as this popular hero of the Peru of the forgotten dreamed.

And today, May 2020, with the pandemic that is invading the air, the city-dweller, starting with the high-income sectors and their governments-in-turn, do not dare to recognize that the economic and social structure will end the lives of the forgotten of the planet the quickest.

Official information from INEI and Ancash Regional Government, 2016-2021: Chronic malnutrition affects 53% of the elderly and 14.2% of children, mainly from the highlands.

Footnote. In 1985, the great machinery of the Aprista party that had reached the presidency of Peru, participated in the Annual Conference of Executives, and police surveillance was intense. At a bar, attendees drank with enthusiasm and accompanied by regional music. A woman, history teacher and painter, who was from the foreign press called to that appointment, requested “The song of Luis Pardo”, and almost muttering the director of the ensemble said that that music was prohibited, and that in a more private place they could be allowed to listen to it.

Surely Luis Pardo, in the 21st century, is still present leading democratic proposals, with honest administrations, working efficiently along with employers that are sensible with their workers. If that were not to be the case, more apocalyptic plagues will come with infinite insurgency for a better world.

Jeff Riggenbach reads The Ego and His Own

The Current Moment in Ireland: Interview with Andrew Flood