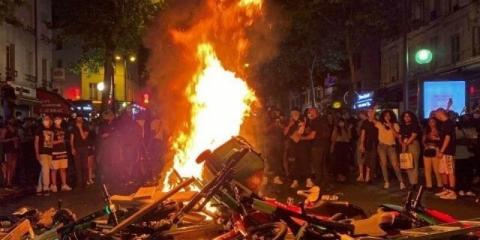 What do the anarchists of 1919 and the Marxists leading Black Lives Matter have in common? Quite a lot.

The voices of those at the helm of Black Lives Matter (BLM) have some Americans worried about what is to come as this summer of civil unrest unfolds. Are rioting, looting, and vandalizing statues a precursor to widespread violence? If this is merely the leading edge of chaos and anarchy, American history may provide some valuable lessons for radicals.

Almost exactly a century ago, the U.S. faced a similar period of civil unrest as far-left radicals, anarchists, and those who identified as communists initiated a violent uprising. This so-called Red Scare resulted in coordinated bombings at the homes of prominent people, including John D. Rockefeller and Attorney General A. Mitchell Palmer. At the time of the attacks, Franklin Delano Roosevelt and his wife Eleanor lived across the street from Palmer and had just passed the house when the bomb went off – close enough that body parts of the man who lit the fuse landed in their front yard.

The mayhem and madness were synchronized to detonate across the country at an appointed time. Explosions hit a church in Philadelphia, the homes of the mayor of Cleveland, a federal judge in Pittsburgh, an immigration chief – the list goes on and on. Accompanying each explosion was a pink flyer that read:

Fast Forward to the Summer of 2020

Today, self-proclaimed Marxists have issued a stark warning: “If this country doesn’t give us what we want, then we will burn down this system and replace it.” That was a threat issued by the president of the Greater New York Black Lives Matter, Hawk Newsome, on a Fox News program in June. BLM co-founder Patrisse Cullors can be heard on YouTube saying that she and a comrade “are trained Marxists … We are super versed on sort of ideological theory.”

While this latest far-left uprising has not elevated to the level of 1919 – or the 1920 bombing of Wall Street, which resulted in horrific carnage – the language of this uprising is strikingly homogeneous to anarchists of the 20th century.

The looming question, of course, is: What did government authorities do to quell the Red Scare? For those who love liberty, the response is unappealing. The so-called Palmer Raids included arrests and detentions without warrants, illegal searches and seizures, and deportation of hundreds of people who were “suspected” anarchists. The Bureau of Investigation (predecessor to the FBI) under the leadership of a young J. Edgar Hoover wielded the Espionage and Sedition Acts as weapons against anyone they thought to be subversive. In all, some 3,500 people were held in detention and an estimated 10,000 arrested.

It’s worth noting that the exact opposite happens when radicals try to force their will on an entire populace. In both eras – the 1920s and the 2020s – anarchist actions provide authorities with the determination to restore civility by any means necessary. The ugly truth is that anarchy most often produces government tyranny. Backed into a corner, law enforcement uses such times to overstep its bounds. Ultimately, those who plan to “burn the system” will come to the conclusion that their actions only serve to permit government authorities to double down on law and order.

It’s likely that efforts to vastly change the American system of government will fail in 2020, just as they did in 1920. The Marxists at BLM should take note of these historical facts as they sally on down the road toward more violence.

Leesa K. Donner is Editor-in-Chief of LibertyNation.com and LNGenZ.com. A widely published columnist, Leesa previously worked in the broadcast news industry as a television news anchor, reporter, and producer at NBC, CBS and Fox affiliates in Charlotte, Pittsburgh, and Washington, DC. She is the author of “Free At Last: A Life-Changing Journey through the Gospel of Luke.”

Alexander Reid Ross on the Far Right and the Hard Left