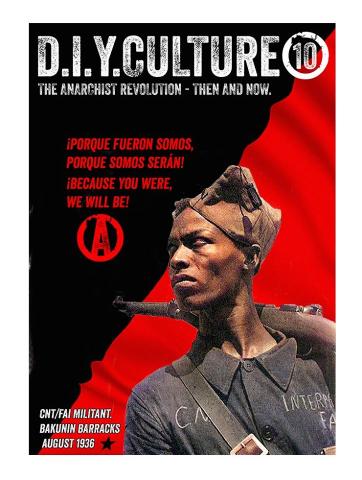 “And yet Barcelona in those years, rather than what was done on the battlefields, was a brief revelation of something latent but dazzling in humanity: the hope to fly like angels. We, or our children, will see it again. In Barcelona and Catalonia, this epiphany was released by anarchists and anarcho-syndicalists.”

Issue 10 of D.i.Y.Culture, is a homage to the class warriors of the Anarchist Revolution that started in Spain in July 1936. This was an insurrection that involved millions of anarchists and as Orwell witnessed, ‘put the working class firmly in the saddle’. An event that challenged the authority of the state, that fought fascism tooth and claw, that erased the power of the cops, that banished landlordism and overpowered organised crime-gangs, that literally burned the centuries of oppression of the Catholic church and was the largest experiment in radical, direct democracy in the history of the world – a social upheaval that had the potential to be a turning point in the history of human-kind.

But this was too much of a threat to the ruling classes of the world, to the dog-eat-dog economics of capitalism and to the so-called communism of the USSR – the crushing and betrayal of this people’s revolution in Spain, was ruthless. Funded and supplied, by (among other states) the USA, the UK and the Vatican and supported militarily by Italy and Germany. A shocking, wasted opportunity to deal with Hitler, Mussolini, Franco and fascism – an appeasement that led directly to the Second World War, to the deaths and deprivation of millions and to the future direction of militarised global politics.

We are of course, scratching the surface with this publication, but there has been a concerted attempt over decades, to bury and discredit the history of the Anarchist Revolution, because it was a dangerous event from the point of view of the powerful (both left and right) and the hope is, that some of these stories will inspire people to find out more – every anarchist has a duty to study what happened in the summer of 1936 and the best way to pay tribute to the uprising, is to build an outward-looking, working class movement from the grass-roots up.

In addition to 10 blazing pages from the Gata Negra collective in Valencia, we have contributions from Stuart Christie (the man that went to kill Franco), Ruth Kinna on the optimism of Emma Goldman, Vipera of the Moscow Anarchists with her take on LGBT oppression in Russia, and news from the anarcho-punks of URC on the continued military clampdown in Cebu City (Philippines). There’s a letter from an anarchist in Rojava, the Whitechapel Anarchist on Revolutionary Working Class Anarchism v Life-Style Politics, Lisa Mckenzie on sweatshops, bosses and unions. Beautiful illustration/artwork from Clifford Harper, The Slow Burning Fuse, Carlos Madriz, Pablo Picasso and The Anarchist Union for Draughtsmen and Painters (CNT).

¡Because You Were,
We Will Be!

[Anarchist News editor’s note: Another way to translate that slogan, which expresses continuity across generations, would be: “Because they were, we are; because we are, they will be!”]
Tags:
journal
pamphlet
zine
media
UK
DIY
culture
spanish civil war

TOTW: Play in the time of corona