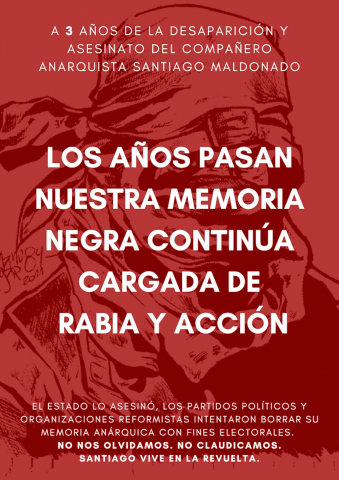 Three years after the disappearance and assassination of our anarchist comrade Santiago Maldonado, words will never be enough to cover the pain generated by the death in action of a comrade in the hands of the enemy and in the recuperation attempt of the reformists, but we can find those that speak of our convictions, of the surrender even in moments where everything seems to be going downhill, of the comrades who time and again raise their heads and in the darkness of the night or in the hooded street struggle claim the insurrected memory, because that is where neither El Lechuga nor any comrade is forgotten, when we do not let the pain overcome our surrender, when we do not give in and affirm once again the social war that the authority has declared on us long ago.

August 1, 2017 not only demonstrated the cynicism of the Argentine State and the hypocrisy of its collaborators, it also opened steps towards solidarity, it set precedents that we cannot forget and we need to keep in mind, moments of effervescence, of meetings of euphoric glances, of preparing and being ready for everything even in spite of the enemy’s gaze on our backs. Both in those moments, and now 3 years later, we are aware that we are not the first, but we also believe that it is up to us not to be the last, today more than ever we face our own history and we reaffirm it, both with its positive aspects and those negative ones that need to be sharpened, but with the unwavering idea that our memory of demands is action and solidarity is a weapon that we will never stop wielding.

MAY THE PANDEMIC NOT QUENCH OUR ANGER
FOR AN ICONOCLASTIC AND INSURRECTIONARY MEMORY.

(via Anarquia, translated into English by Anarchists Worldwide) Surviving a Pandemic: Tools for Addressing Isolation, Anxiety, and Grief