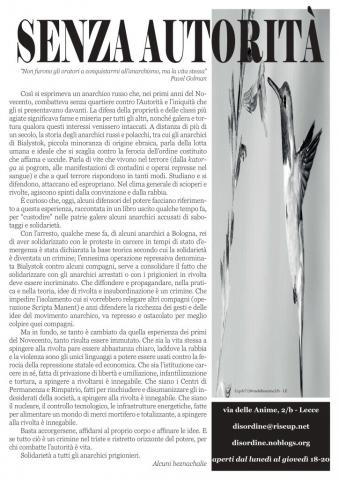 “It wasn’t the orators who won me over to anarchism, but life itself” – Pavel Golman

This was the expression of a Russian anarchist who, in the early years of the twentieth century, fought without quarter against the Authority and the iniquity that presented itself before him. The defense of property and the wealthy classes meant hunger and misery for everyone else, as well as jail and torture if these interests were undermined. More than a century later, the history of Russian and Polish anarchists, including the anarchists of Bialystok, a small minority of Jewish origin, speaks of the human and ideal struggle against the ferocity of the established order that starves and kills. It speaks of lives living in terror (from Katorga to pogroms, to the demonstrations of peasants and workers repressed in blood) and who respond to that terror in many ways. They study and defend themselves, attack and expropriate. In the general climate of strikes and revolts, they act out of conviction and anger.

It is curious that, today, some defenders of power refer to this experience, recounted in a book published some time ago, to “guard” in their homelands jails some anarchists accused of sabotage and solidarity.

With the arrest, a few months ago, of some anarchists in Bologna, guilty of having sympathized with the protests in prison in times of state of emergency, the theoretical basis according to which solidarity has become a crime has been declared; the umpteenth repressive operation called Bialystok against some comrades, serves to consolidate the fact that to sympathize with the arrested anarchists or with the prisoners in revolt must be incriminated. That to spread and propagandize, in practice and theory, ideas of revolt and insubordination is a crime. That preventing the isolation to which other comrades would be relegated (Operation Scripta Manent) and even defending the wealth of gestures and ideas of the anarchist movement, must be repressed and hindered in order to better strike those comrades.

But after all, if so much has changed since that experience of the early twentieth century, so much is unchanged. That it is life itself that pushes to revolt seems to be quite clear, where anger and violence are the only languages that can be used against the ferocity of state and economic repression. It is undeniable that it is the prison institution itself, made up of deprivation of liberty and humiliation, childishness and torture, that drives people to revolt. It is undeniable that it is the Centers of Permanence and Repatriation [CPR prisons – deportation prisons for refugees], made to lock up and dehumanize the undesirables of society, that drive to revolt. That it is undeniable that it is nuclear power, technological control and energy infrastructure, designed to fuel a world of deadly and totalitarian goods, that is the driving force behind the revolt.

It is enough to realize it, to rely on one’s own body and to refine one’s ideas. And if all this is a crime in the sad and narrow horizon of power, for those who fight authority is life.

Solidarity with all anarchist prisoners.

[Taken from disordine.noblogs.org. Text of a flyer published in Lecce, 8 July 2020. At this link you can download the flyer in PDF.]

(via Malacoda, translated into English by Anarchists Worldwide)

UCL Saint-Denis – What we want