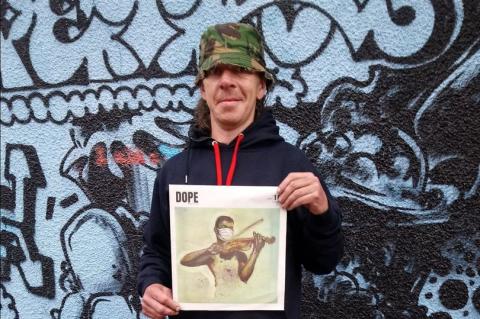 ‘We could see a massive spike in street homelessness’

Amid an uncertain time for hundreds of homeless people across Bristol, a magazine described as the ‘anarchist Big Issue’ is serving as a lifeline for those in need.

Dope, a quarterly paper, was launched in spring 2018 by Craig Clark, a 37-year-old anarchist based in London.

The magazine is distributed for homeless people across the country to sell on the streets, with people ranging from rough sleepers to asylum seekers collecting the newspaper for free.

Vendors in several cities, including Bristol, then sell it for the cover price of £3 and keep the proceeds.

Speaking to Bristol Live , Craig said he started the project after being unnerved by the rising problem of homelessness close to where he worked at a publisher called Dog Section Press, based at the world’s oldest anarchist publishing house.

“The homelessness was shockingly visible outside our office and visibly getting worse,” he said.

“We started to give the magazines out to the local homeless people in the area, just as an experiment really.

“We thought it would be a good way to get the magazine out to people and it turned out to be really popular.”

Since then, Dope has been distributed to vendors in almost 20 towns and cities around the UK. In Bristol, it is distributed by the People’s Republic of Stokes Croft.

Craig continued that the distribution of the magazine is especially important at the moment as many people face uncertain futures due to the impacts of the coronavirus crisis.

The ‘Everyone In’ scheme saw around 260 people who are homeless or rough sleeping placed in emergency accommodation in hotels in Bristol, as part of a government and council response to the pandemic.

In May, Bristol City Council put a call out to universities, private landlords and others in the housing sector to help provide homes amid concerns the scheme was coming to an end.

“People are possibly going to be back on the streets soon and we could see a massive spike in street homelessness,” Craig said.

“There’s also going to be a lot of job losses, a lot of people who have reduced income and people facing eviction so it’s going to be a perfect storm.

“The magazine helps people though because it gives them a way to be seen by other people. It’s important, to be made visible. The vendors say it gives them opportunity.

With its edgy covers and clean aesthetic, Dope has proved hugely popular in Bristol and often sells out the hundreds of copies distributed in the city.

“Bristol is quite an open city but we try to make sure the articles are accessible as possible,” Craig said.

“We try to keep it broad and use a lot of artwork to keep it appealing. As homelessness increases year on year, there’s a lot more we can do.”

To get involved in distributing the magazine, you can visit the Dope website here.