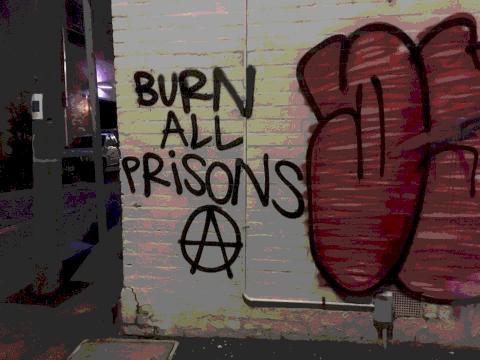 The following text is a letter from the anarchist Giuseppe Bruna, imprisoned since May 21st, 2019, for the “Prometeo” repressive operation, currently imprisoned in Pavia prison. To write to him: Giuseppe Bruna, C. C. di Pavia, via Vigentina 85, 27100 Pavia, Italy.

I hope this one of mine finds you well!

I am writing to report a serious situation (yet another!) that I found myself facing between the afternoon of July 3rd and midnight of July 4th! As you will be aware, I have been locked up since about a year in a cell alone in the “protected” section [a section where are held ex-cops, infamous pedophiles, rapists, etc.] of Pavia’s jail! I have always refused such placement by putting in place various forms of struggle (hunger strike, air strike, etc.).

The health care of the Pavia jail, even though I never underwent any medical examination (even if there was a specific request of the judge for the preliminary investigations, Basilone), stated that I am under treatment (with what?) for my thyroid lymph node (which has never been checked here) and that I had a serious form of bronchopneumonia and in case of need they would have provided to help me!

On Friday (July 3rd), in the afternoon, a big storm arrived on Pavia with gusts of wind; not having time to close the window, the wind closed the blindo [armored door] of my cell, which often happens when there is a lot of wind… I must point out that the bells to call the guards do not work, you just have to scream! In this case, the working prisoner warned the guard on duty, telling him that I was “closed.” I heard it from my cell… I haven’t called a guard since I’ve been locked in this sewer; their presence irritates me… Waiting for them to reopen the armored door, as for everyone in the section, I take care of something else in the cell, knowing that around 9:00 p.m. they would have passed by anyway with the nurse who distributes psycho-pharmaceuticals… at about 8:30 p.m., the zealous guard opens the spyhole of the armored door and I immediately tell him to open the door like all the others, that I am very agitated and I can’t breathe! He answers with a “Yes” and then disappears! Around midnight, when the guards make the count and changed shifts… I don’t know what happened, I don’t remember anything. I found myself on the floor full of slime with 4-5 guards who kept calling me; someone said that maybe I was dead! They never called the doctor, nor the nurse. I have never been examined, even under these circumstances… I have long ago understood why I was placed in this section of this prison! At about 10:30 a.m. (July 4th, 2020), I was called to the infirmary, after having informed the nurse of my illness and about losing consciousness during the night. In front of the doctor on duty, I say what happened during the night: there is the nurse and a “graduated” guard who witnesses the conversation; while he take the parameters, I manifest to the doctor a strong pain in my forehead from the blow taken with the fall; the nurse tells me that there’s nothing visible, and explains that the guards came at midnight, when I was lying on the floor; that is how I was when the guards on duty found me; maybe now they could have made sure of my health! At this point, the guard present intervenes and with a threatening tone he tells me that “I talk too much” and that I have to talk only about medicine! The doctor on duty and the nurse (who seems to be the wife of a guard) are present; they remain impassive! I asked for the medical records; let’s see if they bring them to me! I hope this letter gets to you and doesn’t disappear!

I ask you to be involved with me against the placement in this section and in this jail!

Send this letter to as many people and websites as possible!

I rise with my head up high, vomiting all my hatred against the placement in this section!

Freedom for the comrades of Rome!