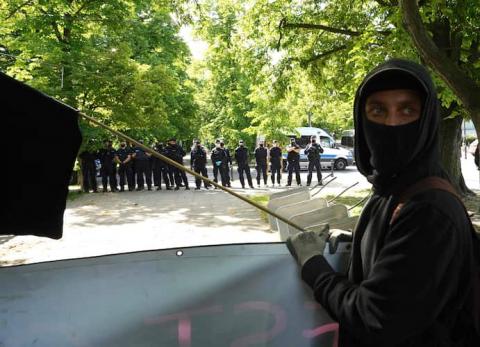 As protests continue to sweep the nation, a narrative has emerged blaming alleged “anarchists” for stirring the pot. They are, the story goes, materializing out of nowhere to sow chaos, put marginalized people at risk and generally make more peaceful protesters look bad. On June 1, President Trump retweeted a video implying that a man who later explained that he was helping other protesters buy medical supplies was instead paying them to incite violence. In his tweet, Trump added, “Anarchists, we see you!” After surveying damage to city property, Dallas County Commissioner John Wiley Price declared, “It’s not protest, it’s anarchy.” The next day, Post opinions contributor Helaine Olen wrote that Trump is “the real anarchist.” Her only basis for making this claim appeared to be the common use of “anarchy” as a flawed synonym for “chaos.”

This reflexive tic to associate anarchism with thoughtless discord betrays a profound ignorance of leftist ideology. The problem is that no one seems to understand what anarchism is or what its adherents are seeking to accomplish — and that lack of understanding is going to end up endangering a lot of people. We’re rapidly approaching a point in which dissent is further criminalized, the justified rage and pain fueling these protests is further delegitimized, and anyone who engages in any form of protest outside the preapproved liberal template becomes a target for surveillance, or worse. On June 3, with zero evidence backing its claim, the White House Twitter account trumpeted: “Antifa and professional anarchists are invading our communities, staging bricks and weapons to instigate violence. These are acts of domestic terror.” At least one of the supposed weapons caches appears to have been part of a security barricade in front of a Jewish community center.

Are there anarchists out there in the streets standing in solidarity with Black Lives Matter and against the brutality of the police? Absolutely. Is every single one of them conducting themselves in a manner that all would consider “peaceful?” Perhaps not. But there is no nefarious anarchist plot to intentionally place black protesters or other vulnerable people in harm’s way. In fact, to do so would be anathema to anarchism itself. The black anarchists and anarchists of color who have been erased by this narrative have also been clear about their own views on the situation. As William C. Anderson, co-author of “As Black as Resistance: Finding the Conditions for Liberation,” noted on Twitter, “Focus anger and frustration on the people in power doing the killing and the oppressing. Don’t believe all this nonsense about anarchists, especially if you don’t even know what anarchism actually is.”

So what is anarchism? As I’ve explained before, it is a radical, revolutionary leftist political ideology that advocates for the abolition of government and all other unequal systems of power in favor of a society organized around direct democracy and voluntary association. Though it encompasses many schools of thought, most anarchists are committed to a basic set of beliefs. Key anarchist principles include mutual aid (a reciprocal approach to community care in which people share resources), direct action (the use of political protest to achieve a goal) and horizontalism (a non-hierarchical organizational system in which decisions are made by consensus). Anarchists advocate for abolishing institutions such as prisons, police and the military, which they hold to be inherently oppressive. Anarchists are by definition anti-capitalist, anti-racist, and directly opposed to all other forms of bigotry and oppression. They are anti-fascist (though not all anti-fascists are anarchists!), which opens up another potential avenue for repression now that the president has fixated on antifascists, or “antifa,” and law enforcement has continued to surveil and target leftist activists.

In practice, to be an anarchist is to dream of a kinder, more equitable society, and to do one’s best to get us closer to making that dream a reality. For every minute of protest footage showing anarchists out in the streets, there are untold hours spent attending endless meetings (anarchists love meetings), cooking and delivering food and supplies to those who need it, researching far-right groups, planning demonstrations, providing child care and other support to comrades, and taking part in other communally minded projects. It may sound hokey, but anarchism is about love as much as it is rage; there is a certain utopian romance to it.

Anarchism is also well suited to dealing with disasters like the coronavirus pandemic and offers a path forward for those fed up with government malfeasance, liberal inaction and the cruel machinations of a reality show king. As we’ve seen during the aftermath of Hurricane Katrina and Superstorm Sandy, in autonomous zones like Chiapas and Rojava, and other, similar contexts, beautiful, necessary, life-sustaining worlds can spring up around the voluntary work of those striving to improve things together. We’ve already seen countless mutual aid projects spring up to help people cope with the coronavirus, and the idea itself — which dates to 20th century anarchist philosopher Peter Kropotkin

Anarchism as such is not about violence, chaos or arbitrary disruption. Yes, anarchists have sometimes used violent tactics: President William McKinley was assassinated by anarchist Leon Frank Czolgosz on Sept. 6, 1901, and the molotov cocktail has become a familiar sight during uprisings in Europe and South America. However, violence isn’t the point. “Anarchism has but one infallible, unchangeable motto — Freedom,” anarchist writer and Industrial Workers of the World co-founder Lucy Parsons, who was born into slavery, once wrote. “Freedom to discover any truth, freedom to develop, to live naturally and fully.”

Despite all that, anarchists are still given short shrift, and misconceptions, rumors, propaganda and outright lies about anarchism and anarchists themselves abound. Sen. Tom Cotton (R-Ark.) has been calling for military forces to target them specifically (and thus protesters in general), most recently in a widely criticized New York Times op-ed. CNN senior media correspondent Brian Stelter referred to property destruction in Manhattan as “anarchy on the streets” (while real “anarchy on the streets” most often looks like a Food Not Bombs table or jail support group). Trump has repeatedly referred to “professional anarchists,” a concept so absurd that it’s long been a meme within the radical community. And, whatever you may have heard, neither the Democrats nor billionaire George Soros are funding any anarchist groups. (No anarchist would ever identify as a Democrat, any more than one would ever accept cash from a capitalist plutocrat like Soros.) Anarchist groups are autonomous and self-funded, and as a predominantly poor and working-class community, aren’t exactly known for having deep pockets.

All of this obfuscation and misinformation is a shame, because anarchism has many lessons to offer about caring for our communities and all of those in need. The concepts that make up its core have become increasingly popular, even as anarchism itself has been dismissed as a mere thirst for destruction. As long-running anarchist collective Crimthinc wrote in their anthology “Expect Resistance: A Field Manual,” “No one is more qualified than you are to decide how you live; no one should be able to vote on what you do with your time and your potential unless you invite them to.”

As others survey the smoldering ruins of the American Dream and beg politicians to take mercy on the most vulnerable, it’s worth reminding people that life doesn’t have to be this way. The government has shown that it won’t save us. We know that the rich won’t save us. But if we embrace the true spirit of anarchy, maybe, just maybe, we can save ourselves.

Kim Kelly is a freelance writer and labor organizer based in Brooklyn whose writing on labor, radical politics, and culture has appeared in the New York Times, the Guardian, the New Republic, Teen Vogue, Pacific Standard and other publications.

A Letter From the Other Front

HANDS OFF THE SQUATS

Scarcity and Abundance Under Anarchism

No Really, What is Anarchism?

Recalling the First Week of the Uprising in Seattle

Review of protests in Belarus