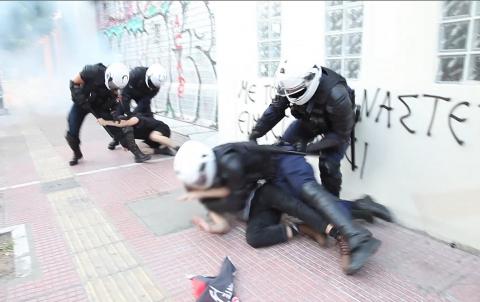 15 July 2020, Athens, Greece: This is what democracy looks like. No, really. This is what democracy looks like. These public servants called “officers of the law” are agents of a democratically elected government. Their acts -regardless of the fact that they are dressed, look and act like a criminal gang and regardless of the fact that if these exact same acts were to be committed by citizens, they would be deemed as crimes according to the law- are authorized and take orders by democratically elected governments all over the world, every day, for decades and decades now. Face it. The fact remains, that although many would not characterize this as “democracy”, because it so obviously arbitrary and unjust, it is actually Democracy.

Okay, to exercise this kind of brutal violence on your fellow human beings, as a policeman, (as depicted in the video), you have to have the predisposition in mind and soul to be barbaric, beastly, cruel, brutal, sadistic, savage, violent, vicious, ruthless, monstrous, inhuman, evil, heinous, merciless, remorseless, heartless, cold-blooded, crooked, immoral, foul, wrongful, vile, dishonourable, horrible, corrupt, depraved, malicious, despicable, shocking, atrocious, brutal, murderous, abominable, disgusting, hateful, contemptible, loathsome, repugnant, gruesome, sickening, nauseating, hideous, horrid, gross, appalling, terrible, horrendous, intolerable, shameful, disgraceful, unworthy, immoral, undignified, debasing, indecent, grotesque, horrific, repulsive, repellent, awful, terrible, detestable, malevolent, execrable, teratoid. Nevertheless, these peoplee people are civil servants and they carry out orders of a democratically elected governent. Orders, that in this case, concerned the protection of a racist demonstration in Victoria Square, in the center of Athens, Greece, called by the Golden Dawn neonazi party and several other racist groups, against the refugees forced to stay homeless in that square. The refugees that were thrown in the streets and forced to sleep on the ground due to a recent law by the greek government of “New Democracy”. Eventually, about 20 racists (no kidding) gathered. And all these 20 racists, “cuddled” with an “army” of dozens of armed policemen. And all of them together, on a common front against approximately 400 anti-fascists holding a counter-protest.

The rally was coming to an end and while the riot policemen were looking ready to attack the antiracists, many people decided to leave in a coordinated manner, in order to disband outside the Athens University of Economics (ASOEE) located a few blocks away. With a defensive stance, as it can be clearly seen in the video. When the anti-fascist bloc was approaching ASOEE, followed by ten police bikes and dozens of riot cops, suddenly the bikers increased speed, ramming people with their motorbikes, chasing and attacking with batons those who began running, and in the midst of suffocation by the asphyxiating gas grenades and the noise from the flash bang grenades, they arrested and savagely beat two protesters.

The bikes do not start out of the blue to develop speed and ram protesters a few minutes before they disband, without even a teeny-tiny reason. Policemen follow orders. We have a democracy. And this is what democracy looks like.

We Want a World Without Cops, Not Another Investigation