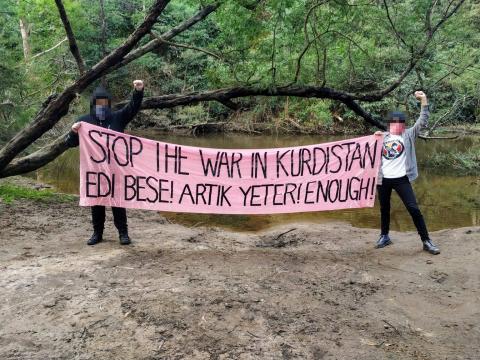 On the 19.07.20, the 8th birthday of the Rojava Revolution, we unfurled these banners as a small gesture to the brave Kurdish women warriors of the YPJ, and remembering too the brave Gunai warriors past & present who resist this hell colony known as gippsland / australia. A few queer punks with a plan to escape the industrial hellscape for the afternoon, only to find ourselves at a pumping station along a river at the foothills of the Baw Baws, behind Energy Australia’s filthy coal power stations. Downstream where the water stagnates, overtaken by weeds, and 4WD’s rip up the earth beneath the towering gums, the surrounding hills long cleared and farmed. And yet in spite of this colonial violence, life exists, eco-systems persist. We realise our banners are no great threat to the colonial project, we humbly share them with the intention to show our love and respect for the Rojava revolution and Indigenous resistance worldwide – from the occupied territories of the Gunai Kurnai Nation to Kurdistan and beyond.

Hands to the Gunpowder!