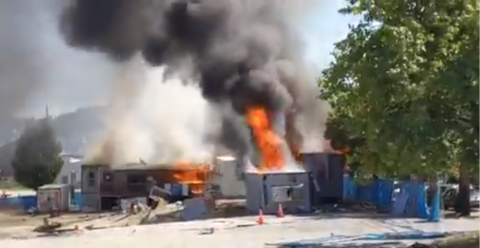 On July 25th, demonstrations were held across the US and around the world in solidarity with the uprisings in Portland, Oregon.

In Seattle, Washington, revolutionaries burned down the buildings at the construction site of a new youth detention center. The windows of the building that houses State Patrol and several other state offices were smashed and road flares and rocks thrown at police.

Nightly street fights have been taking place in Portland for the last six weeks between residents and city police and Border Patrol troops. The Border Patrol troops were sent as a show of Federal force, but have been beaten back by unrelenting resistance and growing forces in the streets.

Anarchists arrested for graffiti in Indonesia