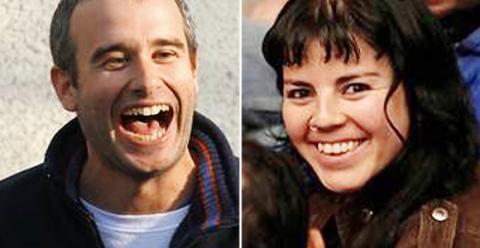 Monica Caballero and Francisco Solar once again arrested under the frame-up of bomb cases n ° 4, 5, 6 … (we already lost count)

Since the morning of this Friday, July 24, various raids began to be carried out in various communes of the Metropolitan Region, events that ended with Monica Caballero and Francisco Solar being detained (previously criminalized and acquitted) in what appears to be the new “Bombs Case”, which would laughably involve the most questionable character from the previous Piñera government, the former minister of the interior and creator of the failed frame-up of “Bombs Case” n °1, Rodrigo Hinzpeter.

The news spread by the hegemonic media, has shown that their criteria has changed little since the previous bombs case 1, bombs case 2, bombs case 3, among other instances that have sought to criminalize comrades linked to anarchism.

Just like almost 10 years ago, they have not hesitated to present Mónica Caballero and Solar as criminals, grotesquely ignoring the history of the protagonist of this new frame-up, one of the founders of National Renewal and promoter of the bill for Strengthening Public Order or “Hinzpeter Law” that sought to penalize the social struggle and the seizures which happily was not approved by Congress, during the first Piñera government.

Remember the police station that suffered an “explosive attack” in July 2019 in Huechuraba and that caused laughter and ridicule when all its disordered interior was shown in the media, except for the photo of Piñera which curiously survived without damage? Well this would be one of the cases, that along with the sending of a “mail bomb” to the Hinzpeter office, would detonate (pardo the expression) in this new bombs case of indeterminate number.

Mónica Caballero and Fransisco Solar ended up in preventive imprisonment, under the orders of the 11th Santiago Guarantee Court, for the duration of the frame-up and its investigation. Both will be formalized this afternoon.

Meanwhile, in the complicit media such as La Tercera, it did not take long to make a familiar profile of one of the IMPUTED, to finish with the phrase “possible involved”, we expressed the concern of being in front of a professional of the POLICE FRAME-UP, and not very good one at that, Rodrigo Hinzpeter who today works as manager of Quiñenco , a company belonging to the Luksic group .

From the Collective for the Freedom of the October 18 Political Prisoners have expressed their concern about this fact, we leave below the statement issued during this afternoon.

We the Collective for the Freedom of the October 18 Political Prisoners express our deepest support and solidarity with our comrades Francisco Solar and Mónica Caballero, who were detained in their homed by the State, represented by the OS-9 of carabineers and the South Metropolitan Prosecutor’s Office in a wide police deployment carrying out raids early in the morning.

On one hand, we make visible and repudiate the permanent political persecution carried out against both of them for standing up as anti-authoritarian social fighters that, among others, are being systematically repressed today in the same way that all who have manifested themselves against the apparatus of Power in the fight for dignity since the beginning of the revolt. For this same reason, we fear for the safety and well-being of our comrades.

In spite of being a developing news story, it’s important to point out that this Friday at noon, 3 house raids have already been reported, meanwhile, permanently, the State works on revising a new Intelligence Law.

Lastly, we sustain our rejection of the treatment that the news was given by the bourgeois media, that once again, as it has been historically, are at the service of the State apparatus, incisively collaborating with the criminalization of protest.

We share the link of the “Bombs Case Frame-up” documentary:

Anarchist Responses to a Pandemic: The COVID-19 Crisis as a Case Study in Mutual Aid