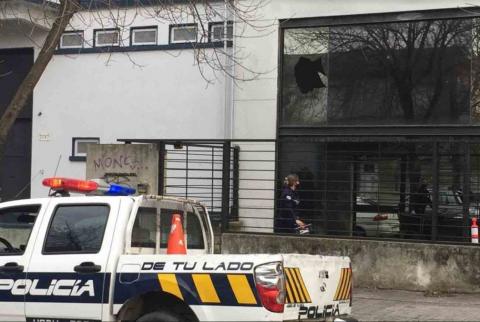 From Contra Info via Anarchists Worldwide

In the early hours of Monday the 20th of July we attacked the headquarters of the Construction Consortium Ferrocarril Central with stones, Molotovs and protest flyers.

The CCFC is the group responsible for the construction of the train for the company UPM. In Uruguay they want to install one of the largest cellulose plants in the world, to carry it out the Finnish company UPM needs the construction of a railway infrastructure to connect directly with the bridge that the company will also install in the capital of Montevideo for the entry and exit of their goods.

Both projects are currently under construction. What happened on the morning of the 20th is a warning that we will not remain passive in the face of the devastation of the land and the misery that the state and the capital want to condemn us to.

The struggle is for life…and now.

We will not pay for what has been stolen from us