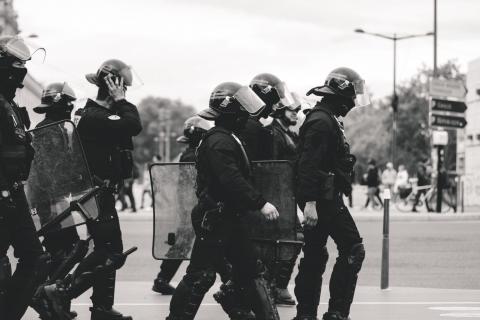 From It’s Going Down, by Peter Gelderloos

White vigilantes play a vital paramilitary role in the functioning of any settler state. The violence of such vigilantes was the driving force in the US’s westward expansion, and at the same time the paramilitary culture they developed became central to the official military, as documented by John Grenier and Roxanne Dunbar-Ortiz. The vigilantes of the KKK were the vanguard of the terrorist reaction against Reconstruction, bolstering racial capitalism. Vigilantes like James Earl Ray can assassinate problematic rebels, allowing the official branches of law enforcement to keep their hands ostensibly clean. White vigilantes patrol a border designed to kill, and they have assassinated and injured numerous people participating in the George Floyd uprising.

More recently, another kind of white vigilante has carved out a niche. This kind comes from the Left, and they claim to be critical of the police and the white supremacist structures with which they work hand in hand.

Meet Kristina Beverlin. Kristina was a participant in the CHOP in Seattle who frequently used her social media (@krisbeverlin on Twitter and @mindfulexplorer on Instagram) to share #BLM posts and criticisms of the police.

Isaiah Willoughby was arrested on Tuesday for setting a fire outside the abandoned 3rd Precinct in Seattle.

The police were able to identify him because this paranoid “ally” posted pictures of him acting as a professional “outside agitator.”

Now he is facing decades in prison pic.twitter.com/KDWNfU4u15

On June 12, however, she shared photos of a Black man she claims to have seen start a fire at the East Precinct. “I need everyone in Seattle to retweet the photo of this man”, she writes. On July 14, Isaiah Thomas Willoughby was arrested on federal charges of arson, which carry a minimum of 5 years in prison and a maximum of 20 years. He was identified thanks to Beverlin’s photograph.

This is not the first time Beverlin has worked as a volunteer snitch under cover of her “journalistic” activities. On June 4, she tweeted a video of a Seattle protester who she claims was “the first, to break Nike’s windows. He had no fear of being arrested. Never tried to run.” Multiple other tweets recycle conspiracy theories of police trying to start riots, with large speculative leaps or rumors in the crowd as her only evidence. She frequently extols the virtue of “100% peaceful” protests and claims, also based on rumor, that the SPD wanted protesters to burn the East Precinct down.

The marriage of pacifism and conspiratorial thinking is a key component of the left-wing white vigilante. Brought up on Mel Gibson and Joss Whedon movies, they believe that revolution is simply the revelation of some nefarious conspiracy of power, that once people have the truth, power will fall. The role of conspiracy theories in political thought has anti-Semitic and anti-Black origins, and the 9-11 Truther movement has already shown us that conspiratorial thinking aids the far Right and weakens actual movements for liberation.

But in the cheap maneuvers of a snitch like Beverlin, we can also see how conspiracy theories serve as an alibi for white people. Though governments have their morbid secrets, NONE OF THE KEY ASPECTS OF WHITE SUPREMACY AND CAPITALISM HAVE EVER BEEN HIDDEN. The intertwined brutality of capitalism and colonialism—with the race regimes they brought to life—has always existed in plain view. The “truth” that should supposedly bring this system crumbling down has never been more than one neighborhood away from even the most sheltered of white people. If there are white people who did not join the fight against the police before police murders were regularly caught on video, it is because they chose not to listen to people of color.

Those whose hypocritical ethics force them into the streets only once #BLM becomes the top trending hashtag are in desperate need of another conspiracy to preserve their white privilege even as they take up an oppositional pose.

OBVIOUSLY, people who are getting systematically murdered by the cops need to be able to fight back, to defend themselves. Obviously their expressions of rage are both legitimate and intelligent, and obviously other people should fight alongside them, also exposing themselves to bodily injury and the risk of imprisonment. Unless. Unless…

Unless that’s what the cops actually want us to do, and we’ll really show them by being completely peaceful, not destroying anything, not disrupting anything.

This infantile logic is so self-serving, it’s astounding. But some people will do anything to preserve their power and privilege. That’s why we have police murders in the first place.

Kristina Beverlin’s profile image shows a person, presumably her, wearing a Batman mask, which, frankly, couldn’t have been scripted better, as Batman validates the white imaginary of the ultra-punitive vigilante upholding an unequal social order, the No Holds Barred terrorism that is necessary for polite company to speak of rights and due process, just as every District Attorney must be accompanied by its KKK or extrajudicial assassinations to keep the system running.

Her justifications for her snitching are also telling. In the initial thread about the precinct fire, she repeatedly uses law and order language to delegitimize this Black man who allegedly lit the match. She describes the behavior of a street person with all the pathology a Karen can muster.

“He is acting like a drunk. Like he’s mentally ill[…] One guard who said he had to physically remove him from damaging property yesterday.” “he wobbled off […] muttering to himself[…] mumbling”.

Now that she has cast him inequivocally as an antisocial element, homo sacer, she wades right into another trope systematically used in the delegitimization, surveillance, and murder of people who are considered pyscho-emotionally abnormal, another group—together and overlapping with Black people—disproportionately targeted by police violence. She claims he is faking it.

“But no one who is drunk or schizophrenic navigates crowds like that. Or blends in like that.”

The expert journalist has spoken. Not only are ALL drunk people incapable of walking in straight lines, ALL people with some mental health diagnosis are incapable of navigating around obstacles or blending in with a crowd (even though many in fact have special practice at doing exactly that to avoid the violence of the normies).

Aside from the disgusting combination of racism, ableism, ignorance, and snitching, Beverlin presents us with a key move out of the conspiracy theorist playbook: arguments based on faulty common sense, appealing therefore to someone’s prejudices in the guise of reason. What makes her such an effective snitch, representative of a broad phenomenon, are the combination of prejudices she is appealing to.

People with mental illness cannot be trusted. Black men are violent. Violence is bad. The police are lawless and conniving.

In what type of person, exactly, do these four different prejudices coincide? The answer: middle class people and white people with a superficial, spectacular critique of policing. In other words, the vast majority of white allies and other people trying to push the rebellion in a reformist direction.

Subsequently, in defending her snitching after Willoughby is arrested, Beverlin turns to other arguments. She highlights her hard-hitting critiques of the SPD. She’s a useful ally, she seems to say, and her continued presence in the movement is well worth the sacrifice of one Black man’s life. Black lives might matter, but her comfort, status, and self-image matter more. When asked how many cops have been arrested or fired as a result of her citizen journalism, she declines to answer, but we can assume the number is a big fat zero.

As police and politicians insist that this wave of uprisings is the sole work of “outside agitators” to justify violent crackdowns, now’s the time to revisit the long, racist history of the term and its role of fracturing solidarity in the name of counter-insurgency. pic.twitter.com/KqSFzxBuWM

Desperate to preserve her theory linking Willoughby to the police, now that it is public knowledge he is not actually a cop, she claims there are videos of him spouting pro-police positions in the past. Regardless of the veracity of the claim, and the absolute hypocrisy given the fact she has assisted in a prosecution, it is still a facile justification for sending a Black man to prison. In contrast, the federal affidavit claims Willoughby was motivated by anger at how he was treated in a previous arrest. In other words, he putatively had pro-police positions in the past, but was now responding to an incident of brutality he experienced at the hands of cops, and this fucking Karen destroys his life because she chose to believe rumors that it was actually the police who wanted the precinct to get burnt down.

Oh, and also—and this is important—because “I damn sure didn’t want a single person to think that -> I <- had started the fire”, according to one of her tweets, explaining why she began photographing him.

We need to widely discredit conspiracy theories as a trojan horse for right-wing logics and complicity with the State. Because conspiracy theories rely on an inability to distinguish between faulty and decent logic, we need to hold ourselves to higher standards. Collective self-education needs to be prioritized in movement spaces. This can be difficult, however, when movements swell overnight, growing exponentially, with people coming in from a mainstream society that rewards self-serving ignorance (to be clear, I’m referring primarily to privileged people here, since nothing atrophies intelligence like complacency).

Remember the lesson from Minneapolis. Conspiracy theories lead to the media and the State attempting to divide movements and ready the ground for repression. That way, when the hammer falls, people are already divided and pointing fingers. Don’t fall for it a second time around. pic.twitter.com/rA3vNJomTB

We need to share methods for didactic crowd strategies, a pedagogy of the mob. In the past, techniques have been shared about how to create a more social riot, taking care of one another and creating synergy between rock-throwers and chanters, for example, but it is more difficult to communicate in a crowd about things that will play out long after the riot is done, like conspiracy theories and arrests.

Often, stories are the most effective way of spreading an idea. After Amy Cooper was caught trying to win an Oscar with her terrified 911 call in Central Park, millions of white people got it. Well, not it, entirely, but at least one small part of the arsenal of whiteness that is used to brutalize people of color.

Just as Amy Cooper was made an example of, white vigilante snitches like Kristina Beverlin need to become exemplary, stories of how pacifism and conspiracy theories combine to turn supposed allies into cops’ best friends and agents of white supremacy. She has destroyed a Black man’s life to defend her own comfort.